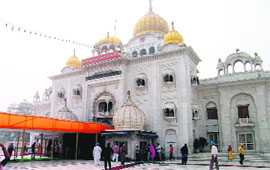 Amritsar,Punjab: With less than a month left for the Delhi Sikh Gurdwara Management Committee (DSGMC) elections, the ruling SAD (Delhi) and the Opposition SAD (Badal) are gearing up for a tough battle in the electoral arena with the latter even announcing the first list of its candidates.

Talking to The Tribune, DSGMC Chief Paramjit Singh Sarna said though they’re yet to release their first list of candidates, they’ve already started the campaign in around 90 per cent of the seats that are going to polls on January 27. “We’ve finalised 40 out of the total 46 candidates and they’ve completed their first phase of campaigning. They’ve already checked the voters’ lists besides placating the disgruntled leaders in their respective areas.” He claimed that all their candidates would meet the voters before January 10. Sarna said that they will rope in Sikh intellectuals and not political leaders for their poll campaign. “Among politicians, we may get former Punjab Chief Minister Captain Amarinder Singh to campaign for us,” he said. Sarna further said they would be seeking votes on the plank of more transparency in gurdwara affairs, better management in ‘sarais’ and maintaining ‘Sikhi Saroop’.

He claimed that the image of the DSGMC is better than that of the SGPC, adding that the people will give their mandate on 25 years of SAD (Badal) rule and five years of our rule in the DSGMC.

On the other hand, SAD Secretary Daljeet Singh Cheema said they’ve already announced their first list of 15 candidates and the rest too would be declared soon. He said all the leaders of the party would be in New Delhi to campaign for the SAD (Badal) candidates, while the poll campaign will be led by SAD (Badal) President Sukhbir Singh Badal
himself.