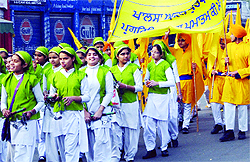 Amritsar,Punjab: A nagar kirtan, commemorating the Parkash Purb of Guru Gobind Singh, which is to be celebrated on January 18, started in the morning from Sri Guru Harkrishan Senior Secondary Public School following an ardaas performed by Giani Gurbachan Singh, jathedar, Akal Takht.

A large number of students and teachers from all schools and other educational institutes being run by the Chief Khalsa Diwan (CKD) took part in it. The nagar kirtan culminated at the Golden Temple.

School Director Dr Dharam Veer Singh while welcoming the sangat spoke about the life of the tenth Sikh Guru. Charanjit Singh Chadha, president, CKDCS, appealed to all to reach the Golden Temple to celebrate Gurpurb.

On the Gurpurb “Jalau” (show of splendour) will be held at the sanctum sanctorum of the Golden Temple, Akal Takht and Gurdwara Baba Atal Rai for two hours starting from 10 am tomorrow.

The Golden Temple will be illuminated and fireworks displayed after the recitation of “Rehras” at night.