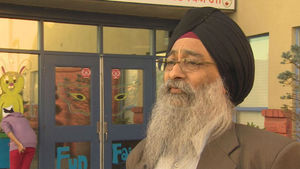 Vancouver, Canada: Nearly 100 students, parents and supporters of the Khalsa School in South Vancouver protested outside the Vancouver School Board office this morning.

The board decided in November not to renew the private school’s lease, which expires in July.

“When we renewed the lease we were very clear with them that it was on a short-term basis… It was a temporary arrangement,” she said.

The Khalsa School has been operating in Vancouver since 1986, providing academic instruction and religious education in line with Sikh beliefs and values.

The original Vancouver Khalsa School building was destroyed by a suspicious fire in 2009. Since then, the school has leased land from the Vancouver School District on the same site at 5987 Prince Albert Street.

The school’s principal had said there was room for the students at the school’s Surrey campus, although it may be too much of a commute for some Vancouver parents.

Bacchus says the board will do what it can for the Vancouver-based students, but it just doesn’t have enough space to house all privately-run schools in Vancouver.

She has agreed to meet with the heads of the Khalsa School to discuss alternatives.