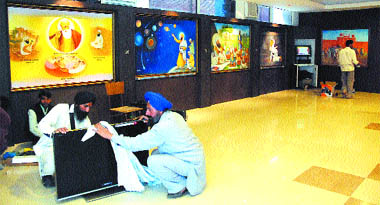 Painter with a cause puts hymns on canvas for illiterate

Bathinda, Punjab: A painter with a cause, this is what aptly describes the local brush-master, Amarjit Singh ‘Painter’, 50. Singh has been a sensitive soul and using his skilled, trained hand and subtle mind has painted the hymns of Guru Granth Sahib and Baba Farid into paintings that can make clear and relevant their meanings to even the illiterate, the deaf and the mute.

Amarjit has been at work for more than 40 years and has worked tirelessly to emphasise the concept of oneness of humanity through his work.

Amarjit has painted more than 50 canvases on different hymns of Sikh Gurus, Bhagats in Shri Guru Granth Sahib and the hymns of Baba Farid.
However, he claims that indifference of Sikh leaders towards his efforts was unfortunate.

Completing his painting on Guru Nanak’s hymn ‘Lakh Akaashan Akaash, Pataalan Pataal’, he added that Galileo and other scientists who proved theories like Big Bang and others were written and conceptualised by Guru Nanak hundreds of years before these scientists arrived on scene.

“Scientists are convinced that there are number of other planets in universe. The message of Gurbani in my paintings could even help people who are unable to hear or read and write learn concepts like these.”