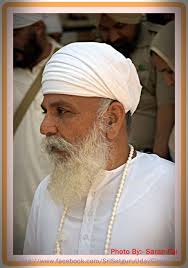 Bhaini Sahib, Ludhiana:  Namdhari sect head Satguru Uday Singh was attacked with an axe during prayers at a Namdhari gurdwara at Leicester in England this morning. The attacker has been arrested. Besides a fracture on the left forearm, the sect chief suffered injuries on the nose and the forehead.

Sant Surinder Singh Namdhari, vice-president of Namdhari Darbar, said the incident took place while Satguru Uday Singh was performing a “kirtan” amidst a packed hall of devotees at a Linden Street gurdwara.

During the “kirtan”, a person clad in a blanket headed towards Satguru Uday Singh. After offering prayers, he pulled out an axe and attacked the sect chief who fended the attack with his forearm and received a deep cut.

According to Sant Surinder Singh Namdhari, the attacker was soon overpowered by followers of Satguru Uday Singh. Some devotees also sustained injuries in the process.

“I have just come to know that Satguru has been discharged from the hospital. He has sustained a fracture on the left forearm,” said Sant Surinder Singh. He demanded strict punishment for the attacker.

The attacker, a turbaned middle aged man of Indian origin, was handed over to the police but his identity could not be ascertained immediately. Satguru Uday Singh had reached England only two days ago.

Tension gripped Bhaini Sahib near Ludhiana after news of the attack on Satguru Uday Singh reached here. The dera office-bearers held a meeting and flayed the attack on the sect chief besides praying for his speedy recovery.

While Lakhvir Singh Namdhari said the assailant was suspected to be an activist of the banned militant group Khalistan Liberation Force (KLF), Sant Surinder Singh Namdhari said, “Naming any organisation for the attack will not be appropriate at this stage.

The Leicester police is conducting an investigation. I urge the community to stay calm as Satguru is visiting England to spread the message of peace.”In the wake of the attack on sect chief Uday Singh, the security of Thakur Dalip Singh should also be increased, said Navtej Singh, chairman of the International Namdhari Sangat.