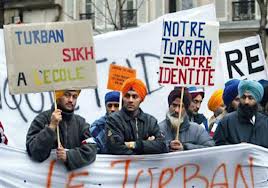 Amritsar, Punjab: Tanmanjit Singh Dhesi, who originally hails from Jalandhar and been chosen by England’s Labour Party to contest parliamentary elections from the Gravesham constituency, today said that if elected, he would make every effort to ensure that the turban was given due respect at foreign shores.

Earlier, Dhesi was Mayor of Gravesham.

Replying to media queries after paying obeisance at the Golden Temple here, he said it was unfortunate that Sikhs had to undergo the ignominy of having their turban frisked at various international airports in the US and Europe.

He said, if elected, it would be his endeavour to promote Indo-UK ties.

Meanwhile, condemning the proposal moved by Canada’s Quebec assembly to impose a ban on the turban and kirpan, the Shiromani Gurdwara Parbandhak Committee (SGPC) president, Avtar Singh Makkar, has said that this must be stopped.

In a press statement here, he said the ban would hurt the sentiments of the Sikhs all over the globe.

He said the move was especially deplorable as the Sikhs in Canada had immensely contributed to the development and prosperity of that country.

He urged the Indian Government to intervene and safeguard the rights of the Sikhs living in Canada’s Quebec province. The extreme right Sikh organisation, Dal Khalsa, too has expressed alarm over the issue and sought the intervention of the Centre.

Previous: Month-long tour of border areas for troops proves a success
Next: Makkar for action against PGI doc