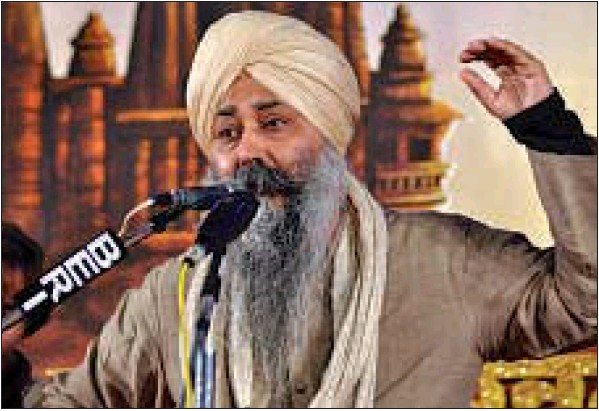 Comments Off on Kirtan adds zest, warmth to a chilly Sunday morning 472 Views

Jalandhar,Punjab: Baldeep Singh, a vocalist and percussionist and the 13th generation exponent of the kirtan, added zest t o chilling morning, during the 137th Harivallabh Sangeet Sammelan in the wee hours on Sunday.

Baldeep Singh of Talwandi Gharana, who has preserved the sacred musical practices, while performing shared, “Whenever my wife gets angry with me, I sing Raag Bhairavi to persuade her as she loves it. Her face starts blushing whenever I sing raag bhairavi and she gets ready to convince for whatever I demand.”

“She is very keen to learn raag bhairavi and raag bhageshwari. My elder son Luigi Hari Tehal Singh made his debut with the rebab on stage while younger one Leonardo Amar Dhyan Singh got associated with Pakhawaj instrument and received some rave views.

“This is for the first time that I am performing on such a big stage without the blessings of my mother. Yet I had to perform today but I am very upset with the sad demise of our daughter too, Damini, the gang rape victim. I will sing to forget the pain of my mother and that of the girl,” he said.

While performing raag basant, he recalled that Guru Nanak Dev ji used to enchant gurbani in dhrupad and chhand genre, which is not used these days.

Earlier the whole audience, performers and organizers present on the festival, mourned the death of Delhi gang rape victim for two minutes and paid tribute to her.

2013-01-01
Guest Writer
Previous: Sikh Human Right group urges India to render justice
Next: Parties gearing up to battle it out as DSGMC elections draw near