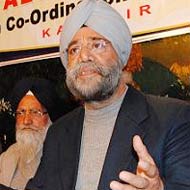 Comments Off on J&K reshuffle: Sikh body unhappy over lack of representation 411 Views

Srinagar,India:  A day after cabinet reshuffle in Jammu and Kashmir, a Sikh body today expressed displeasure over lack of representation of the community in the government and threatened to launch a campaign against the alleged discrimination.

“We will start a campaign against government for ignoring the community’s representation in the cabinet,” Convener of All Parties Sikh Coordination Committee (APSCC) Jagmohan Singh Raina said. He said even though there are many Sikh leaders in the ruling coalition, none of them were given a cabinet berth which could have benefited the community.

“APSCC will start a tour of villages and towns of the state to educate minorities especially Sikhs on the discrimination they face from government and how they have been kept out from circles of power and governance,” Raina said. Alleging that the government had in past four years only given “hollow promises” to the community, Raina said “we met Chief Minister Omar Abdullah and many of his cabinet colleagues in the past with our problems and genuine demands but nothing has happened.”

The Sikh leader said their organisation will appeal to the community against supporting coalition candidates in 2014 general elections. “We will ask minority not to vote for the coalition for the simple reason that they don’t care about Sikh and do not include our politicians in the cabinet,” Raina said. He alleged Sikh community, which is one of the four minorities in the National Commission of Minority Act, is being neglected by the present government. “It is the only state where the minority is having no representation in the cabinet despite the Act favouring the community representation,” he said.