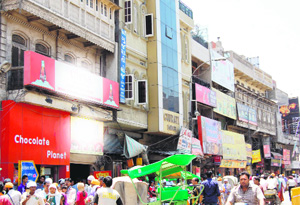 Amritsar, Punjab: The alleged illegal hotels around the Golden Temple have become a bone of contention for the local authorities. On one hand, there are stern directions from the Punjab and Haryana High Court, which has summoned the Municipal Corporation (MC) Commissioner as well as the Senior Town Planner to explain their action taken against the illegal mushrooming of these hotels, inns or guest houses, while on the other hand, the affected hoteliers have charged the MC authorities with projecting the wrong picture of the whole scenario.

Lately, the MC has chargesheeted three of its officials, who were held guilty of inaction against these illegal hotels during their tenure, and it has been learnt that the role of several more officials are under scanner. Meanwhile, the MC is conducting a fresh survey to check licences and permissions taken from the authorities of these hotels. Besides, though the number of illegal hotels under question as per the official record is merely 21, but it was an open secret that this number rolls in hundreds.

The MC has also submitted a list of hotels to the Police Department and asked it to lodge an FIR against their proprietors, who have been operating them illegally.

In reply to the summons of the high court, following a writ petition filed by PHRO activist Sarbjit Singh in 2010, it was in May, 2012, when the then Deputy Commissioner Rajat Aggarwal had “categorically” admitted that 21 multi-storey hotels/inns/restaurants never complied with the norms of the MC Building Bylaws and were issued notices.

Municipal Corporation officials maintained that these properties were in operation as hotel/inns/restaurants, but not cared two hoots to obtain requisite permission from the MC or comply with norms. Out of this, six enjoyed the immunity as their owners had obtained stay orders through the high court after they were issued notices.

Commissioner, MC, DPS Kharbanda said the Deputy Commissioner of Police had been asked to book the proprietors of as many as 15 hotels or inns under the Sarai Act, but the MC officials whose role was found to be doubtful, too, faced the action.

“We are scanning the whole scenario as per law as this homework was necessary before appearing in the high court on November 25. The 21 hotels or guest houses are those which are located in the Galliara area, whereas there are over 100 such commercial establishments which are running illegally. Also, we are gauging the role of officials who had turned a blind eye to it and let it happen. These hotels, some even raised to six-storeys on just 50-60 sq yard “residential” plots, never obtained the mandatory no-objection certificates (NOCs) either from the Municipal Corporation or the Fire Department,” he said.

With no alternate fire escape route, there are only “narrow stairs” leading to upper floors. “Barring 2 per cent of them, none of these hotels/inns/restaurants have the mandatory provision of parking lots,” said Kharbanda.