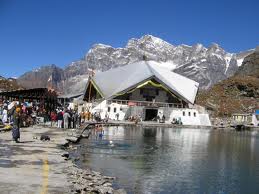 Patiala, Punjab: The yatra of Hemkunt Sahib, a Sikh religious place in Uttarakhand, is likely to resume by later this month if the situation improves at the ground.

“The Shri Hemkunt Sahib Management Trust (SHSMT) and the Uttarakhand government have been contemplating to resume the yatra for a limited period of 10 to 15 days,” vice-chairman of the trust Narinderjit Singh Bindra told a news agency over phone today.

Claiming that incessant rains have been delaying restoration work, Bindra said he would accompany Uttarakhand Chief Minister Vijay Bahuguna to the spot next week to take stock of the situation and take a final call on the yatra.

Private helicopters could be pressed into service for the yatra so that pilgrims could pay their obeisance, he said, adding the temporary bridge over the Alaknanda river at Gobind Ghat had been constructed and the trek route thereon re-levelled for pedestrians.

The yatra was stopped in June after flash floods created havoc in the hilly areas of the state.

Hemkunt Sahib, where Guru Gobind Singh meditated before his incarnation as the 10th Sikh guru, is one of the most revered places in the religion.

Every year, the doors of Hemkunt Sahib open for pilgrims from June 1 to October 5.

The Gurdwara located at an altitude of 4,632.96 metres (15,200.0 ft) remains closed during winter as environmental conditions are not suitable for pilgrimage.