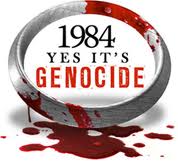 Chandigarh: The Punjab and Haryana high court on Tuesday directed the Punjab government to inform about modalities for the formation of a high-level committee to review orders of the authority cancelling red cards of victims of the 1984 Sikh genocide .

The division bench comprising chief justice Sanjay Kishan Kaul and justice Augustine George Masih was hearing a bunch of petitions of Sikh genocide  victims taking up the issue of cancellation of their red cards illegally and also about cancellation of red cards of illegal beneficiaries. The state government had issued red cards to riot victims so as to avail compensation of Rs 2 lakh and other benefits in housing schemes and commercial booths as per the state policy.

Appearing for the state government, advocate general Ashok Aggarwal sought time from the court to seek instructions from the appropriate authorities regarding the constitution of the high-level committee.

Representing the riot victims in one case, advocate Mansur Ali said the Ludhiana deputy commissioner (DC) had in an arbitrary manner cancelled red cards issued to the petitioners despite the fact that the latter had submitted all comprehensive proofs to the authorities that during the 1984 genocide , they were displaced from various cities and states.

The court was informed that after the high court directions on a public interest litigation (PIL) filed by the Sikh Danga Peerat Welfare Committee, P unjab, regarding illegal issuance of red cards to some people, the Ludhiana DC had ordered an inquiry into the case.

The high court had on February 13 stayed the Ludhiana DC’s January 29 order cancelling red cards issued to 20 victims of the 1984 genocide .