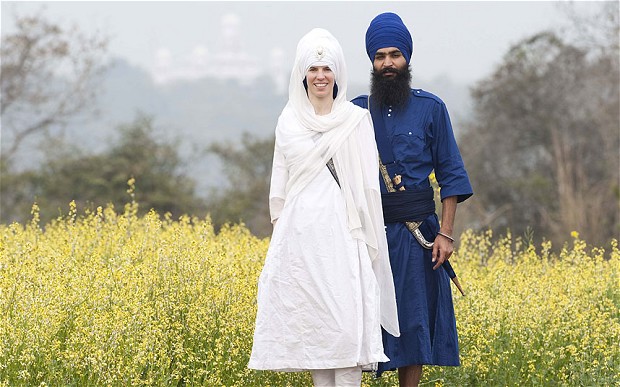 UK: Alexandra Aitken’s two-year marriage to a Sikh holy man is said to have hit the rocks.As the daughter of a Conservative ex-cabinet minister, Alexandra Aitken caused a stir when she renounced her western way of life and moved to the Punjab to wed a Sikh warrior, Inderjot Singh. Now, friends of the former “It girl” have been less surprised to hear rumours that the marriage has hit the rocks.

“Alexandra and Inderjot split earlier this year,” claims a friend of Jonathan Aitken’s family. “She is still a devout follower of Sikhism, but their marriage was in trouble.

“The Aitkens told me that Alexandra then moved to Italy. She was there by herself for some time and is now back in India. She loves her life out there, but Inderjot seems out of the picture.”

Ally, 33, is one of Aitken’s two daughters by his first wife, Lolicia. He also has a daughter, Petrina Khashoggi, 32, from an affair with Soraya Khashoggi, the former wife of the arms dealer Adnan Khashoggi.

Ally stunned her family when she announced in late 2010 that she was to marry Inderjot, swapping the nightclubs of Mayfair for a simple life in the holy village of Anandpur Sahib in northern India.

In a recent interview, she explained how she follows the teachings of Guru Gobind Singh, which include not cutting your hair, using a wooden comb and carrying a ceremonial spear and dagger.

She added that was then staying at a meditation centre in Anandpur Sahib, Amritsar.

When contacted about the alleged separation, Ally refuses to comment, saying, cryptically: “Thank you. Forgive me. Many believe, ‘don’t talk unless it improves on silence’.”

Last year, having changed her name to Uttrang Kaur Khalsam (“victorious return” in Punjabi), she hit the headlines after she was photographed walking barefoot in her Indian hometown, dressed in long, traditional robes.

In one hand, she clutched a spear and in the other, a bag of bananas. Meanwhile a pair of iPod headphones was seen tucked beneath her imposing white and purple turban.

Ally, who once posed naked for GQ magazine, first encountered Inderjot, a member of the deeply religious Nihang sect, at the Golden Temple in Amritsar while she was on a yoga retreat.

Despite not speaking a word to him, she returned six weeks later and declared her love. The pair became engaged and, within months, were married in a 4am ceremony witnessed by 150 holy men from the Nihang sect.

“Her parents were unable to attend but, as a glossy shoot for Hello! revealed, her sister, Victoria, was by her side.

She moved into an Indian ashram and would spend her days praying, meditating, practising yoga and helping locals women scrub the temple floors with holy water.

Little is known about the mysterious Inderjot, who reportedly changed his name to Janbazz Singh Akaali (“daredevil” or “brave-hearted” in Punjabi).

Ally once described him as a pious man, dedicated to helping the poor and whose armed Sikh sect is like “the SAS of the religion”. However, his relations have been critical, saying he was not a true Nihang and had no obvious means of supporting his wife.

“Every 15 to 20 days, he comes home to take money from his mother,” said his uncle.
Aitken tells Mandrake that he does not “believe” that Ally has become estranged from her husband.