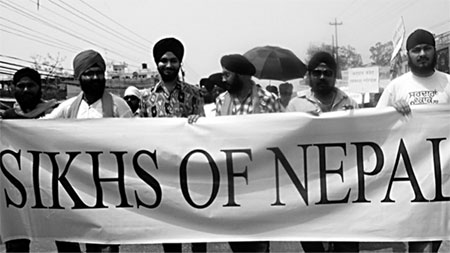 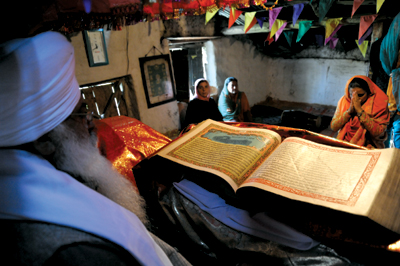 Kathmandu, Nepal: Guru Nanak’s visit to Nepal completes 500 years in 2015 and the efforts are afoot to celebrate the same with the help of Nepal Government in a befitting manner. This article is meant to give detailed information about Guru Nanak’s visits as the author gained from his research in Nepal and from various books and other materials.

Nepal spreading over a length of 800 kms and a breadth of 150-200 km, is diagonically cut by 28 degrees latitude south of the Himalayan main ridge, the eastern part of which also forms the northern frontier with Tibet. The Nepalese territory crosses over the central Himalaya at some places in the West, especially in the region of Mustang and extends up to the Tibetan plateau. In the south, Nepal borders with the Indian states of Uttar Pradesh, Bihar and West Bengal and in the east with Sikkim. Climatically the region can be divided roughly into three regions: temperate and humid in the southern parts along Terai and Gangatic regions of India, which is forested; the moderately cold regions which contain most of the middle ranges i.e. Siwalik and the Mahabharat chains with heights ranging between 2000-3000 m; (Valleys like Kathmandu and Pokhara lie in this region) and extremely cold region around Himalayan peaks like Dhaulagiri, Annapurna, Kanchanjanga, Gauri Shankar, Makalu, etc. Many rivers flow in North-South direction, the more important being the Seti, Karnali, Bhari, Kali-Gandaki, Buri-Gandaki, Trisuli, Sunkosi, Dudh-kosi, Arun and Timur. Most of the old tracks were along the rivers.

The Nepalese are a deeply religious people. Though Nepal gave birth to Buddhism, yet it is the only country in the world which has Hinduism as its state religion. The deep religiosity of the Nepalese people finds expression in a multitude of shrines and temples – over 6000 in Kathmandu alone.

The kingdom of Nepal is one of the world’s oldest monarchies. Newars who settled down in Kathmandu valley between 1000 and 700 BC dominate the Kathmandu Valley, the limb centre of entire Nepal. Lichhavis (400-750 AD), Thakurs (750-1200 AD), Mallas (1200-1768 AD) and Gurkhas from 1768 AD have been the ruling dynasties. During Guru Nanak’s period, Mallas of later period were the ruling dynasty. Yakshamalla, who ruled the state from 1462 -1482 was a strong Malla king, but after his death the empire was split into smaller kingdom under his heirs. In 1482 kingdoms united against external enemies, they competed and fought with each other. During this period, the Rajputs, pushed out of North India by Islamic invaders, had started encroachments into Nepal and by 1550 AD defeated the Raja of Gorakhnath (Gurkha) and settled down permanently in this realm. The Kingdom was in a state of turmoil when Guru Nanak travelled to this region.

Guru Nanak travelled to Nepal during his Sumer Udasi. He returned from Mansarovar along Kali Nadi which flows along the Western border of Nepal. Thereafter, he entered Nepal through Terai region. Probably from Sitamarhi, where the famous temple of Sita stands, he is believed to have visited Janakpur, the birthplace of Sita. From Janakpur he is stated to have entered Birat Nagar and visited Chatra, situated on Sunkosi/Kaushiki Nadi. I was told of a banyan tree near Chatra, close to the dam site under which a small temple exists in the memory of Guru Nanak, and is presently manned by an Udasi. This place is known as Varahkshetra or Koka-Nukh in old records. The Sikh Sangat of Silligurhi, specially those who have been visiting the site, were eager to construct a Gurdwara at the site, but due to some legal problems the site has not been acquired so far.

From Chatra, Guru Nanak visited the fort of Dhomri. Then he went through Shivpur to Brahamkund where he attended a fair and delivered discourses to the people gathered. The people worshipped Yakshas. The Guru advised them to worship one God. He is remembered as Nanak Rishi in this area.

After Brahamkund, Guru Nanak visited Lakhanpur and Palti Lake. There from, through the hills of Hawal Khanchi, he reached Krishna Tal area and preached True Name. After Krishna Tal, he proceeded through Dhaulagiri ridges to Belagarh and reached Kathmandu and Bhakatpur area, the two capitals of Patan and Banepa, the later Malla kings.

(b) Earlier photograph of Nanak Math

There are in all five historical Gurudwaras in Kathmandu; the most famous being “Nanak Math” situated on the bank of river Bishnumati. This historical Gurdwara is related to the third journey of Guru Nanak Dev Ji when he visited Nepal. It is said that Guru Nanak Sahib actually stayed here for some time and mediated at this serene site. He asked Bhai Mardana to play upon the rabab and himself sang one of his hymns. The yogis and ascetics of other cults gathered around the Guru and held discussions. At that time, the King of Nepal, Raja Jai Jagat Malla was very impressed with Guru Ji’s discourse and he donated many acres of land to spread religious beliefs as guided by Guru Ji. A description of this land is secured even today in the documents of the revenue department. At present, the Gurdwara has 7-8 acres of land and the remaining land is encroached upon. The Gurdwara is situated on the hillock on the western bank of the River Bashnumati.(27°43’31″N 85°18’19″E). Buses are being organised by a Delhi Transport Company which go every year from Rakab Ganj/Gurdwara Bangla Sahib, New Delhi for the darshan. With the approval of the Nepal government, the birth anniversary of Sri Guru Nanak Dev Ji was celebrated on November 17th this year at Kathmandu based Gurdwara Guru Nanak Math for the first time. Ardas during culmination of his birth anniversary celebrations at Gurdwara Nanak Math in Kathmandu, was performed by Giani Gurbax Lamsal Singh, whose original name was Chat Prasad Lamsal and converted to Sikhism way back in 1976, performed Ardas to mark conclusion of Akhand Path.

Gurbax Lamsal Singhwas baptized as Sikh in Jodhpur in Rajasthan. He studied Sikh theology from Sikh Missionary College in Amritsar, where he stayed before being moved to Nepal to manage religious affairs of Gurdwara Shri Guru Singh Sabha, Kathmandu,” said Ravinder Singh Sethi, a leading transporter of Nepal and an office-bearer of management committee of Singh Sabha Gurdwara. Gurbax had also learnt playing harmonium and tabla, told one of the pilgrims that even his brother had also converted to Sikhism and his wife had also embraced the faith. Responding to the campaign launched by Dubai-based philanthropist SPS Oberoi, the Nepalese government had reportedly allowed Sikhs to organize Gurpurb celebrations at Gurdwara Nanak Math.

Another Sikh Bhai Gurdeep Singh is also performing religious duties at Gurdwara Singh Sabha on permanent basis. Since Guru Nanak came here in 1515; the fifth century of his visit to the place is being planned in big way.

Besides this, there are 4 more historical Gurdwaras in Nepal. There are about 400 members of the Sikh community in the area. There are also two Dharamsalas in the memory of the Visit of Guru Nanak Dev ji, one managed by Nirmalas and other by Udasis. Apart from the above a new site for building a central Gurdwara in Kupandole, Kathmandu was founded in 1976 by the Sikh Sangat where community services include Sangat Langer on Saturday afternoons. “The Sikh temples clustered around Thapathali and the Dharahara, rebuilt after the 1934 earthquake reflect magnificent Sikh architecture,” says Sameer Pradhan, a student of history.

In and around Kathmandu, Guru Nanak stayed for some weeks and visited the three capital areas, holding discussions with people of all walks of life. Kathmandu was known as Kantipur at the time of Guru Nanak’s visit, but.given the name of Kathmandu due to the wood (kath) temple platform (Mandu of Gorakhnath). The temple has been made out of a single tree. Other important temples in Kathmandu are Swami Shivnath temple, Bodhwati and Pashupatinath temples. Swami Shivnath temple is about two thousand years old, on a hillock which is reached by climbing 400 steps. It has a huge idol of Mahatma Buddha. Pashupatinath temple situated on the bank of river Baghmati is considered as the most sacred temple among Hindus. Lalitpur and Bhadgaon are the other important towns of Kathmandu Valley. Lalitpur, also known as Patan, is 5 kms away from Kathmandu on the other side of Baghmati. Indian King Ashoka ordered construction of five Stupas in this area. It was the capital town of Nepal at the time of Guru Nanak’s visit. The Avalokiteshwara monastery built in 13th century, is one of the oldest monuments. Other temples of the period are the three stepped pagoda of the Red Machendranath and Kumbeshwar. Many other temples came up in 17th and 18th century. Bhadgaon, also known as Baktapur (city of faithful) lies approximately 16 km east of Kathmandu on the trade route to Tibet. It is the third royal city in Kathmandu Valley which, during the period of Guru Nanak’s visit, was an independent kingdom. Vatsada and Siddhilakshmi as well as the Buddhist monastery Chetur Varna Mahavihar were founded during the period of Guru Nanak’s travels.

Guru Nanak preached at most of these temples before he proceeded to Tibet. From Kathmandu, Guru Nanak alongwith his companions is stated to have visited Thyangboche where his idol and a manuscript have been preserved to this day. Guru Nanak is likely to have proceeded through Doleghat, Chiyaubas, Surke, Kiranti Chap, Namdo, Kabra, Valleys of Jarsakhola and Sikri Khola, Jiri, Batasha Danda Ridge, Those and Shivalaya to Jhoding monastery at Thodungla, and reached Bhander. From Bhander he probably proceeded through Sate, Lamjurala, Sherpa villages of Dragdobuk and Junbesi and visited Chiwant monastery. From Junsebi, he would have proceeded further through Phalali to Jubing, Kharela, Phakding and to Namche Bazar. From Namche Bazar, his next visit was to Khumjing monastery and Thayangboche. Thangboche monastery situated at 3867 m. in the lap of Amba Dablam (6856 m), is one of the most beautiful sites of the world, on a tableland, amidst breath-taking scenery, surrounded by a panorama of Khumbu – Himalaya with Mount Everest. The ‘Head Lama’ of the Thyangbhoche monastery is a reincarnation of Boddhisatva, highly revered by Sherpas. The scalp of a yeti, a snowman is kept and displayed in the monastery. Guru Nanak also held a discourse with the Head Lama of the Thyangboche Monastery.

The Lamas were highly impressed by Guru’s teachings and became the followers of Guru Nanak. A large-sized idol of Guru Nanak and a manuscript of Guru Nanak were seen at the monastery by the famous Everest leader, M.S. Kohli, who writes: “The cupboards in Gompha contained many manuscripts. There were idols of past Lamas. These included one of Guru Nanak or Guru Rimpoche.” The Head Lama told him that certain writings of the great Gurus were in his personal possession.

From Thyangboche, Guru Nanak came back to Khumjing on the trading route of India-Tibet and proceeded to Tibet through Nanak La Pass (5500 m) – the name that appears in the maps – and reached Tinjti Dzong in Tibet. From Southern Tibet, he went to Sikkim through this route.