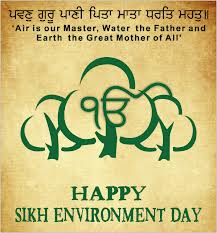 Washington, USA:  For the first time, 35 gurdwaras in Pakistan mainly in Sindh and Balochistan, and in Nankana Sahib, the birthplace of Guru Nanak, joined Sikh institutions in India and abroad in observing Sikh Environment Day, according to information received here.

Tens of thousands of Sikhs across the world celebrated the Day Thursday, according to Washington based Sikh organization, EcoSikh which had appealed to all Sikh groups to observe the day with environmental action programmes.

The day when Guru Har Rai, known for his deep love and sensitivity towards nature and its preservation, became the seventh Sikh Guru in 1644, is observed by the community as Sikh Environment Day to garner support from various faith communities and officials.

EcoSikh president Rajwant Singh, said: “It is amazing to see so much enthusiasm among the Sikh communities all around the world, and we believe that this is the largest direct action by the Sikhs for the environment in the history of Sikhism.”

Ravneet Singh, Programme Manager of Ecosikh in India, said some 1,550 Sikh gurdwaras, organizations and institutions from India and abroad had held special Gurbani recitals on the theme of nature and organized herbal plants and flower shows.

“For the first time, Sikhs in the British Army are also organizing their special observances on environment.” he added.

Gurdwaras across Punjab and other parts of the world also pledged to reduce the use of Styrofoam and disposables at gurdwaras and religious ceremonies.