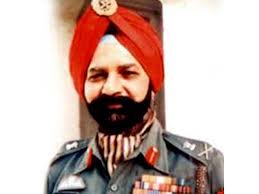 Panchkula, Haryana: The Singh Sabha Gurdwara in Sector 7 of this Haryana town, adjoining Chandigarh, declined to entertain a request by the family of Lt. Gen. R.S. Dyal to hold a prayer service on his first death anniversary this month. The refusal was conveyed Dec 30 to Gen. Dyal’s widow Barinder Kaur Dyal and reason was given that he was part of decision maker who led the brutal attack on Sri Akal Takht. Akal Takht, Supreme authority of sikhism, is the primary seat of Sikh religious authority and central altar for Sikh political assembly.

The Shiromani Gurdwara Parbandhak Committee (SGPC), which controls management of gudwaras in Punjab, Haryana and Himachal Pradesh, has backed the refusal of the Panchkula Gurdwara, saying it was the “right thing to do”.

A 1965 India-Pakistan war hero, Gen. Dyal was the chief of staff of the Western Command headquarters at Chandimandir Cantt. near here when the Operation Bluestar was carried out in June 1984 in Amritsar. The Golden Temple complex suffered heavy damage and many innocent lives lost, many assassinated by army.

“When the family approached the gurdwara for his prayer service, the management said that it could not give permission as there is objection from general Sikh community over his role in Operation Bluestar.

When Gen. Dyal, who had Z-plus category security, died in January last year, the family had organised his prayer service at the same gurdwara never apologized nor expressed any regret on leading attack against Sikhs most holiest gurdwara.

SGPC president Avtar Singh Makkar said: “If the gurdwara management has taken this decision, they must have given a thought to it. The Golden Temple is the most sacred shrine of Sikhs. Dyal led the forces, saying that he was duty-bound. He should have realised that this was his religion’s most sacred place.”

“Usne prayer kya karani jisne guru (Guru Granth Sahib) ki chhati mein goli lagayi hui hai (Why should he (Dyal) have a prayer service when he has shot the guru in the chest). We have the Guru Granth Sahib with the bullet. He led the forces in doing that,” Makkar said, dismissing the plea of the family of Gen. Dyal.