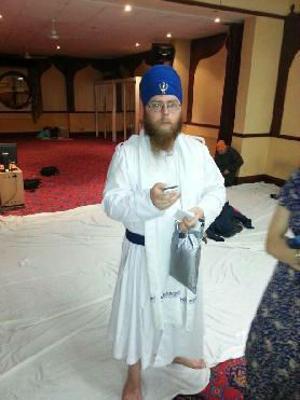 Glasgow, Scotland: Attired in a signature blue bana, hair tied into a bun and a few young kids learning the art of dastaar from him, 27-year-old Christopher — who now has changed his name to Darshan Singh — can easily be mistaken for one of the Sikh preachers at the Golden Temple. Infact, he is.

So much, that the DSGMC chief Manjit Singh GK on Tuesday said a Masters qualification, with English as subject till Class 12, would soon be made essential for a section of preachers to enable them to sensitise young devout Sikhs.

“Most of our preachers come into the job after serving inside the gurdwaras where they largely interact with old people in vernacular. It is equally essential for them to have regular communication with the young Sikhs. We are already trying for making post-graduation a must for the future preachers along with their basic Sikhism fundamentals” GK told the Scottish sikh community.

The present DSGMC norms mandate the selection of preachers through a panel comprising head Granthi at Golden Temple and three scholars from Punjabi University at Patiala.

Most of the current batch of Sikh preachers in India go through a Sikhism course, varying between 1-3 years, at gurmat schools run by DSGMC and SGPC in Delhi and Amritsar.

However, the language remains a barrier for them to communicate with a large Sikh population.

“Besides, there are more people embracing religion after having shorn their hair or simply because of embarassment when they went to abroad,” said GK.

“Also, we are trying to increase the pay bands for both preachers and ragis so as to make their attitude more professional. The scale was recently increased by 25%,” he added.

There are 4,213 preachers and ragis at the gurudwaras run by both DSGMC and Shiromani gurudwara Prabhandak committee.

Although Sikhism does not missionaries around the world, more white people are converting to the religion.

Most foreigners turn to Sikhism through an indirect route of Kundalani Yoga from Harbhajan Singh Khalsa, better known as Yogi Bhajan, a renowned Sikh yoga teacher who went to US in the late 1960s.

“If there can be mini-Punjab in Birmingham and London, why cant there be mini-English speaking preachers of Sikhis. We all are Sikhs, as seekers of the truth” said Darshan, who has now, also begun to sell articles of faith through a stall outside the gurudwara.

Max Arthur Macauliffe (1841-1913), a senior British administrator who was posted to India during the British rule of Punjab, converted to Sikhism in the 1860s.

Dr Lonnie Smith, a 67-year-old New York resident and a jazz musician, recognized as an exceptional player of both the Hammond B3 organ and piano, also converted to Sikhism but did not change his name.

Previous: Sikh Man Tormented by Mississippi DOT Officers and County Judge- Will Justice Be Served?
Next: Pizzas and chips served at langar in UK gurdwaras