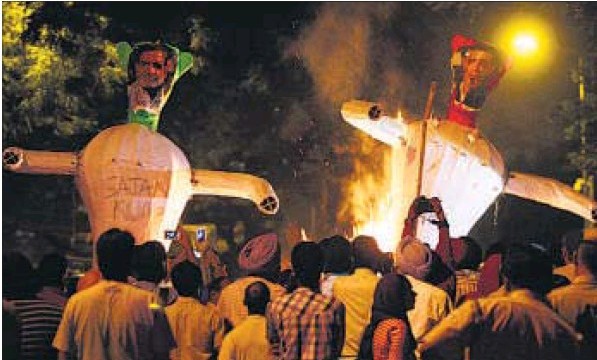 New Delhi: He has shifted home several times, but ‘goons’ allegedly sent by the ‘accused’ manage to track him down. Every time they offer him money and each time he turns them down, he says. They seldom identify themselves but their demand is constant: Retract the witness testimony submitted in court in connection with a 1984 Sikh genocide case.

When Joginder Singh, 65, and his family refuse, the unidentified men threaten him.

Twenty-nine years after Singh saw his late brother Surjit being assaulted and dragged by a mob during the riots at Sultanpuri in northwest Delhi, he still fears for his safety as he waits for justice. As per his court statement, he does not know who exactly killed his brother.

Singh said his 17-year-old daughter went missing 15 years ago. She had gone to a hospital but never returned. A few years ago, unknown people set the cot on which his son was sleeping on fire. So severe were the injuries that he is unable to work even today, he added.

“I am a truck driver, a poor man with no resources. I decide daily where I will spend my night as the goons sent by accused persons track me down,” Singh told HT. “They suddenly land up at my house. They ask my family if I am fine and if I need any money. I keep telling them that I lost my brother already and that I will not withdraw my testimony. They can kill me if they want.” Singh is the main witness against Congress leader Sajjan Kumar in the Sultanpuri case. He has now got security, 29 years after the riots, on the directions of the high court.

Acting on a Se ptember directive of the Delhi Legal Services Authority (DLSA), the Delhi Police provided security to him and two other case witnesses — Sheela Kaur and Popri Kaur — but Singh’s fears are yet to recede.

“The security guards are not with me round-the-clock, just for two eight-hour shifts. I need 24-hour security” he said.

Lawyer HS Phoolka, who represents Singh and other witnesses, says, “We have sought 24-hour protection for nine witnesses who are vulnerable, poor and powerless as they are still getting threats and monetary offers.” The CBI investigated the Sultanpuri and Raj Nagar riot cases and had chargesheeted Congress leader Sajjan Kumar in both the cases.

“Sajjan Kumar was acquitted in the Raj Nagar case but the CBI and the victims have appealed in the Delhi High Court. The framing of charges is over in the Sultanpuri case,” said Phoolka.

A Delhi police spokesperson, “Protection has been provided to the witnesses in compliance with a court order.”