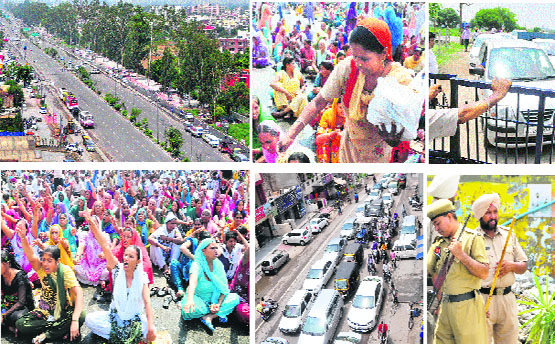 Ludhiana, Punjab: Cult Dera Sacha Sauda followers’ protest today disrupted life in the city for eight hours. The followers staged a dharna near the Verka Milk Plant on Ferozepur Road from 8 am till 4.30 pm against the uploading of a photograph of dera chief Gurmeet Ram Rahim Singh on a social networking site showing him in poor light.

The police diverted traffic on alternative routes to avoid inconvenience to commuters, but they suffered due to long traffic jams in the humid weather.

Heavy vehicles were caught in traffic jams on streets in residential areas. People had to spend hours on the road to reach their destinations.

People who had to attend to important and time-bound work in different parts of the city were among the worst hit as they got stuck in the Bhai Randhir Singh Nagar area.

Ramandeep Kaur, a resident of Moga who had come to the city along with her children to visit her critically ill brother at a city hospital, got stuck in a traffic jam on Ferozepur Road for two hours.

“It is one of the worst days of my life. I had to deposit fee at the hospital for my brother’s operation. The protesters are heartless. The operation will get delayed now because of them,” said Ramandeep Kaur.

“I reached the university one hour late as the protesters did not allow me to pass through Ferozepur Road. My entire schedule has got upset. Students were waiting for me on the campus. This is not the way to protest. The government should deal with such protesters strictly,” said Jagrup Singh Sidhu, a professor at Punjab Agricultural University.

Rajinder Singh, a resident of Jagraon, said, “Due to the blockade on Ferozepur Road, the police had asked us to take an alternative route, but that was nothing short of harassment as I had to spend two hours to cross a 5-km stretch. My entire day was spoiled.”

“I want these cult followers to move from Punjab to their cult leader state, Harayana. We don’t want them here in Ludhiana.” says Ranjit Singh. They only seek trouble and raise voice over petty issues.