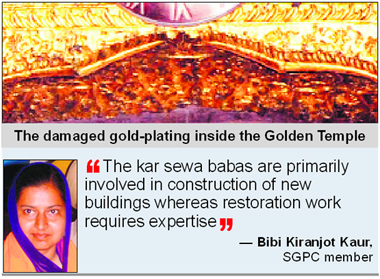 Amritsar, Punjab: Bibi Kiranjot Kaur, SGPC member and a former SGPC general secretary, has opposed the move to hand over the ‘kar sewa’ for renovating the Golden Temple interiors to Baba Kashmir Singh Bhuriwale, contending that the decision would “ruin heritage”. The ‘kar sewa’ is scheduled to be launched on August 18.

Talking to The Tribune here today, Bibi Kiranjot Kaur said: “When you think about restoration or preservation of an architectural marvel, you should engage professional experts with the necessary experience in the field. Baba Bhuriwale doesn’t have any background in restoring or conserving artwork.”

She said Baba Bhuriwale was handed over the ‘kar sewa’ of Darshani Deori gates but had yet to complete the task. She pointed out that the ‘kar sewa’ to replace the gold-plates on the outer walls of the shrine in 1995-99 was not up to the mark.

“Those engaged in the kar sewa had claimed that the gold would not lose its sheen. But it started turning black within a couple of years.”

She said the material used for repair work at that time did not gel well with the original material used in the construction of the shrine.

“There was no seepage in the sanctum sanctorum, which stands amid a sarovar, prior to the gold-plating in 1995-99. Now, the seepage needs to be treated scientifically on priority.”

The former SGPC general secretary said that “kar sewa wale babas” should not be allowed to carry out any work in the Golden Temple complex, as “these babas are primarily involved in the construction of new buildings while restoration requires expertise.”

She felt that the SGPC should constitute a heritage cell comprising conservation experts and a dedicated staff for the purpose.

Bibi Kiranjot pointed out that the Damdami Taksal had raised Operation Bluestar Memorial taller than the adjoining Gurdwara Thara Sahib in violation of the original plan.

“Now, they are re-constructing the gurdwara after demolishing the old building so as to raise its height and erect a dome atop,” she said.

On the other hand, SGPC president Avtar Singh Makkar said though Baba Bhuriwale had been asked to undertake “’kar sewa”, the renovation works would be done in consultation with and under the supervision of experts. He said Bathinda Member of Parliament Harsimrat Kaur was personally monitoring the work.

Previous: SGPC wants no vehicles in Golden Temple’s vicinity
Next: Kauni could be in further trouble