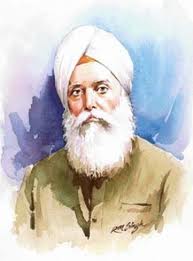 Bathinda, Punjab: The Centre for Comparative Literature at the Central University of Punjab, Bathinda, on Monday conducted literary lecture in remembrance of the eminent Sikh scholar and writer Bhai Kahn Singh Nabha.

Widely known as the author of Mahan Kosh, the encyclopaedia in Punjabi that was published in 1930, Bhai Kahn Singh was born on August 30, 1861.

As an administrator he began his career in 1880, when he started working for Nabha state. He held administrative positions that included City Magistrate, Nazim, Mir/Munshi, Nehar Nazam. Because of his ability to sort out problems, he was also given other responsibilities that included being a foreign minister, a Judge of the High Court and member of the Judicial Council. He compiled Gurushabad Ratanakar Mahan Kosh from 1912-1930. Mahan Kosh, as it is commonly called, has 64,263 entries and is well known for pithiness and accuracy. Bhai Kahn Singh passed away on November 23, 1938.

Eminent scholar Jagmail Singh Bhathuan who has done a lot of research on Bhai Kahn Singh spoke about his teachings and his contribution in detail. Prof. JS Grewal, former Vice Chancellor, Guru Nanak Dev University, Amritsar expressed pleasure at the recognition being offered to such a stalwart and also spoke about his contribution to the culture of Punjab.