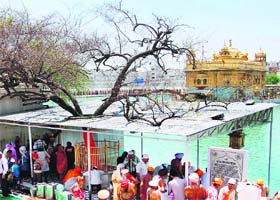 Efforts on to revive beris at Golden Temple

Comments Off on Efforts on to revive beris at Golden Temple 1,001 Views

Amritsar, Punjab: To rejuvenate the decades old sacred beris (trees) at the Golden Temple complex, the marble tiles near their roots would be removed to provide some breathing space to the trees.

There are three beri trees, Ber Baba Budha Sahib, Dukh Bhanjani Beri and Elaichi Ber. Realising the threat to these symbols of Sikh religious belief, experts of Punjab Agricultural University (PAU) and Khalsa College have been looking after these trees.

Acting upon their advice, the SGPC has decided to remove concrete material that had been obstructing the natural stretch of their roots.

SGPC president Avtar Singh Makkar said they had initiated the process of reviving the beris as advised by the experts. The experts have also recommended enhancing sand mounds around the beris to provide them with nutritional components.

“It has been observed that the some portion of Dukh Bhanjani Beri has gone beneath the concrete structure around it. The committee has given its nod to remove the tiles,” he said.

Showing concern over the health of the beris, the experts have conveyed to the SGPC to discourage devotees from touching beris with greasy hands as it would not only attract insects but would also clog the access of tree sap.