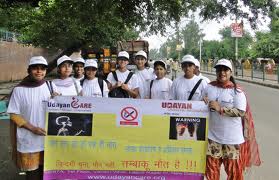 Comments Off on Educational, health institutes say no to tobacco 72 Views

“More people around the world die of tobacco than of AIDS, heroin, cocaine, alcohol, car accidents, murders and suicides. Addiction to tobacco is rapidly increasing even in women and children. Therefore, World Health Organisation (WHO) is focusing in 2013 on banning tobacco advertising, promotion and sponsorship,” said oncologist Dr Navdeep Singh, cancer super-specialist, Fortis Escorts Hospital, on the eve of World No-Tobacco Day.

Referring to WHO figures, he said, “There are more than 1 billion people who are addicted to cigarette smoking. Of these, 20 per cent are women. To add to the gloom, this deadly addiction is casting its shadow on children too.”

He said that those who are addicted to smoking not only harm themselves with poisonous smoke of the cigarette, but also harm those who don’t smoke. In medical science, it is termed as ‘second-hand smoking’.

While talking about how a person becomes victim of tobacco and its addiction, Dr Singh said tobacco contains a deadly element called nicotine. As soon as it gets into the body, it increases the release of dopamine in the brain. Dopamine works towards good mood, peace of mind and it makes the mind more active. Heart, brain and central nervous system become more active as soon as its secretion increases in brain. A person gets addicted when this secretion is increased repeatedly with the use of cigarette, gutkha or other means of tobacco. A person experiences restlessness, anger, disappointment and headache for want of tobacco and ultimately starts consuming tobacco regularly to avoid these symptoms.

He added that tobacco contains eight other poisonous elements.

Health and Wellness Club of Spring Dale Senior School took an initiative to create awareness against the use of tobacco through various activities. The day started with the pledge taken by students of the entire school. They participated enthusiastically in the poster writing and slogan writing competitions and hence exhibited their creative skills.

The students were apprised that tobacco is the foremost cause of preventable death and disease in the world today. India is the second largest consumer of tobacco products in the world. Global Youth Tobacco Survey (GYTS) 2006 indicates that approximately 14 per cent children in the age group of 13-15 years are consuming tobacco in some form.

As per the instructions of Health and Family Welfare Department of the Punjab government, No-Tobacco Pledge Day was observed at BBK DAV College for Women, Amritsar, today. NSS volunteer Komalpreet Kaur recited a touching poem and Harshia gave a moving speech on the dire need to eradicate tobacco consumption.

The students at Khalsa College Amritsar (KCA) today took a pledge to never use tobacco in their lives at a special function organised on the occasion of World No-Tobacco Day today. Principal of the College Dr Daljit Singh gave details account of the ills relating to use of tobacco. He said the the rising incidence of mouth and throat cancer has largely been attributed to use of tobacco by people in the country.

He said that no one should resort to the habit as he cited examples of the message given by the Sikh Gurus who preached against the use of tobacco in society. The students took the pledge that they will not use tobacco and would rather initiate campaigns to make people aware of the ill-effects of tobacco on people’s health.