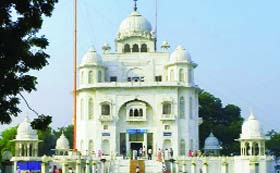 DSGMC told not to raise memorial to genocide victims

New Delhi: The Delhi Sikh Gurdwara Management Committee is adamant on laying the foundation stone of a building in memory of those killed in the 1984 Sikh genocide even though the New Delhi Municipal Council (NDMC) has served a show-cause notice to the gurdwara committee, directing the authorities not to construct the memorial on Gurdwara Rakabganj Sahib premises.

The notice has warned that any violation of the direction would invite imprisonment with a fine of Rs 5,000, said Manjit Singh (GK), president of the DSGMC.

Manjit Singh, along with a delegation of senior leaders, visited the Director, NDMC, and expressed anguish over the government move to prevent the construction of the memorial. In a statement, Manjit Singh said the foundation stone for the memorial would be laid by the five known Sikh personalities. “We do not expect justice from the government. In 2012 the MCD had given the DSGMC permission to construct a memorial in a park. But the Delhi Government did not allow this to happen.

Again the Congress Government in Delhi has pressurised the NDMC to prevent the raising of the memorial though it is to be constructed within the gurdwara premises.”

He said the memorial would be constructed legally and “if we are stopped from doing so, we will come face to face with the Delhi Government,” he warned.

Amritsar: The Sikh Gurdwara Parbandhak committee (SGPC) has flayed the Delhi Government’s move to stop work on the memorial being raised in memory of the 1984 genocide victims at Gurdwara Rakabganj Sahib. Avtar Singh Makkar, SGPC chief, said legal recourse should be taken, if possible, to pave the way for the construction of the memorial. — TNS

Another act of injustice, says SAD

Chandigarh: The Shiromani Akali Dal (SAD) on Friday condemned the Delhi Government for not allowing a memorial at Gurdwara Rakabganj Sahib. In a statement, SAD secretary Daljit Singh Cheema and Chief Minister’s adviser Maheshinder Singh Grewal said by deputing the police to stop work on the memorial the Delhi Government had committed another excess on the Sikh community. Since the memorial was to be raised within the gurdwara, no permission was required from the Delhi Government for the same, they maintained. They accused former Delhi Sikh Gurdwara Management Committee (DSGMC) president Paramjit Singh Sarna of being hand in glove with the Congress, as was evident from his statement that the Sikhs killed in the 1984 genocide could not be equated with martyrs. Cheema said the SAD would finalise its next course of action in consultation with the DSGMC.