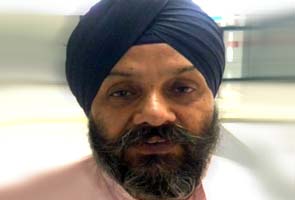 Comments Off on DSGMC to make missions aware 245 Views

New Delhi: The Delhi Sikh Gurudwara Management Committee (DSGMC), whose president Manjit Singh GK was recently asked by security staff at the Rome airport to remove his turban, is planning to invite diplomats from foreign missions to apprise them of the importance of turban in Sikh religion.

At a press conference here, former union minister BS Ramoowalia and office-bearers of the Sikh body, lauded the DSGMC chief and four others for not having removed turbans when asked to do so at the Rome airport on August 6.

After a day’s impasse and intervention by the Indian mission in Italy, the country’s authorities allowed Singh and four others to board the plane.

Narrating the incident, Singh said that he had gone to Cremona city in Italy to attend a Dastar (turban) Awareness Day. He said there had been complaints about Sikhs being asked to remove turbans in Italy for security checks, something which they consider humiliating.

Singh said that on August 6, at the Rome airport when he and four others were asked to take off their “hats” (turbans), the group decided not to comply, even if it meant missing the flight.

Singh said they tried to reason with the Italian authorities and contacted the Indian mission in Italy. He said that as the word spread, support poured from Sikhs across the globe and Punjab chief minister Prakash Singh Badal wrote to Prime Minister Manmohan Singh regarding the incident.

Singh alleged that the central government’s attitude was lax with regard to the problem faced by Sikhs at international airports. “It is sad that such incidents are happening in spite of the fact our Prime Minister is also a Sikh,” he said.

He added that the DSGMC would send invitations to representatives of all countries, asking them to attend an event on the importance of the turban.