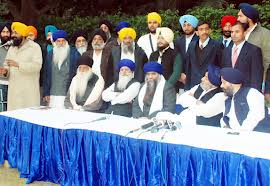 The case was registered in 1987 for his alleged involvement in instigating anti-Sikh genocide in November 1984.

Apart from making Sajjan Kumar face trial for allegedly killing four Sikhs in the Nangloi area, the DSGMC leaders demanded action against police officers, including one of the rank of Assistant Commissioner of police (ASP) for “suppressing” the charge-sheet.

In April, the Karkardooma court had acquitted Sajjan Kumar in another case of rioting.

The memorandum said the chargesheet against Sajjan Kumar though prepared 21 years ago was not placed before the trial court.

“Witnesses had mentioned the involvement of Sajjan Kumar. Now that the only surviving witness in the case, Gurbachan Singh, is severely ill, the charge sheet should be presented in the court as soon as possible,” Manjit Singh GK said.