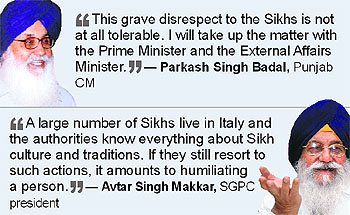 DSGMC chief told to take off turban at Rome

Amritsar, Punjab: Delhi Sikh Gurdwara Management Committee (DSGMC) president Manjeet Singh GK was asked to take off his turban during a security check at the Rome International Airport in Italy on the intervening night of Tuesday and Wednesday. When he refused, he was not allowed to board the flight.

Talking to The Tribune over the phone from New Delhi, DSGMC general secretary Manjinder Singh Sirsa said they had lodged a protest with the Italian Embassy in New Delhi which had assured him of looking into the matter.

He said GK, after missing his 1.20 am (IST) flight today, decided to take the next flight scheduled for 6.30 pm (IST). “But with the Italian Embassy expressing its inability to resolve the issue by then, he will now board a flight tomorrow,” he said. GK had gone to Italy to attend a ‘Dastarbandi Samagam’ (turban tying programme).

Reacting to the incident, SGPC president Avtar Singh Makkar said he would soon send a protest letter to the Italian Embassy in New Delhi as well as take up the matter with Prime Minister Manmohan Singh. He also said they will dispatch a reminder to British Prime Minister David Cameron, as he had assured the SGPC to take up such issues with member countries of the European Union during his visit to Amritsar some months back.

“A large number of Sikhs live in Italy and the Italian authorities know everything about Sikh culture and traditions. If they still resort to such actions, it is like humiliating a person. GK is the head of a prestigious Sikh institution and has his own identity. If they did have any suspicion, there are several modern devices to carry out security checks at an airport,” Makkar said.

This is not the first time that a noted Sikh personality has been subjected to frisking.

The turban of India’s envoy to UN Hardeep Puri was forcefully searched at a US airport in December 2010. Former Hazuri Raagi, Bhai Nirmal Singh Khalsa, was forced to take off his turban at Italy’s Milan Airport on January 21, 2011 when he was returning home after participating in Guru Gobind Singh birth anniversary celebrations there.

Khalsa had also brought the matter to the notice of the Prime Minister and the then President Pratibha Patil, urging them to restore the honour of turban.

A noted raagi, Khalsa is the recipient of the Padam Shri for his contribution to Gurmat Sangeet.