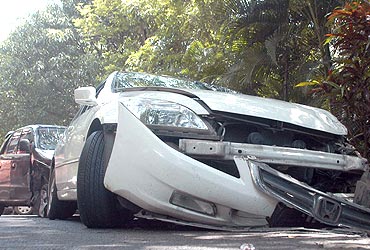 The suspect Marjorie Reitzell, a 54-year-old African American female, who is a resident of Redwood City, hit Kamal Singh, 45, and his wife Balbir Kaur, 50 from behind before her vehicle crashed into a tree.

The couple is survived by their three teenage children.

According to the preliminary investigation by the San Menlo police, the two victims were walking their dog eastbound on Chilco Street, west of Constitution Avenue, in the bike lane.

The car then struck another vehicle that was traveling west on Chilco, causing minor damage and no injuries to the four occupants of that vehicle. The car then continued east in the westbound lane of Chilco Street, until it struck a tree and came to a halt.

The San Mateo County Peninsula Humane Society who responded to the scene took possession of the injured dog for brain injury treatment. At this time the status of the dog is unknown.

She was on probation and her driver’s license was valid, the DMV said. Chahal added that Singh worked as a senior materials specialist at AngioScore Inc, a medical device company in Fremont, and Kaur worked at a Walgreens,drug retailing chain in the United States.

Previous: The Last Killing
Next: Sikh identity issues to figure in conference at Brussels