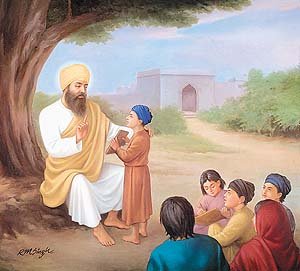 Destruction of Punjab Literacy and TOP Education system by British

Amritsar, Punjab: The notion that with the fall of the Sikhs in 1849 the British East India Company ushered in the `modern age` in the Punjab, especially in Lahore, is one that we need to revisit. What went wrong, and remained wrong subsequently, is a subject that we all need to reconsider.

When the Lahore Khalsa Darbar collapsed, the EIC, thanks mainly to the Lawrence brothers, set about trying to win over the Punjabis, especially the Sikhs. There was a cogent reason for this. The EIC, after a survey, discovered that education in Lahore, and the Punjab, was far superior to the education the British had introduced all over `conquered India`. In Lahore alone there were 18 formal schools for girls besides specialist schools for technical training, languages, mathematics and logic, let alone specialised schools for the three major religions, they being Hinduism, Islam and Sikhism. There were craft schools specialising in miniature painting, sketching, drafting, architecture and calligraphy.

The Company concluded that the Punjabis were years ahead in the field of education than the so-called `enlightened` Europeans. Every village in the Punjab, through the Tehsilar, had an ample supply of the Punjabi `qaida`, which was compulsory for females. Thus, almost every Punjabi woman was literate in the sense that she could read and write the `lundee` form of Gurmukhi. To overcome this, and yet keep the Punjabis `in line`, a deliberate campaign to burn all Punjabi `qaida` was planned. The events of 1857 provided them this opportunity, even though it was because of the `loyalty and sacrifices` of the Punjabis that the British regained India.

But how did the British rulers, now formally under the Crown after the EIC was dislodged after becoming bankrupt because of expense incurred in 1857, gauge the situation? Here we have an amazing book from the legendary G.W. Leitner, the founder of Government College, Lahore, and the Punjab University and undoubtedly one of the world`s greatest ever linguist, who studied `Indigenous Education in the Punjab` in amazing detail in 1882. His conclusions make much better sense today, for they were ignored by the British during the years of their rule. Not that we today care for what the great man said then, yet it seems sensible to bring the matter to our readers` attention.

In the `Introduction` to his original 1882 publication, he starts off by stating: “… in spite of the best intentions, the most public-spirited officers, and a generous Government that had the benefit of the traditions of others provinces, the true education of the Punjab was crippled, checked and nearly destroyed … our system stands convicted of worse than official failure”. The Punjab has this tradition whereby the “most unscrupulous chief, the avaricious money-lender, and even the freebooter, vied with the small land-owner in making peace with his conscience by founding schools and rewarding the learned. There is not a mosque, a temple, a dharmsala that had not a school attached to it”.

This network the British set out to destroy. In the carnage of revenge that followed 1857, the British made it a special effort to search every house of a village and to burn every book. Even in the secular schools of Lahore which used Persian or `lundee` as the medium of instruction, books formed the major bonfire than the British troops `cleansed` the area. Leitner claims that before 1857 the Punjab had an estimated computation as he called it, 330,000 pupils learning “all the sciences in Arabic and Sanskrit schools and colleges, as well as Oriental literature, Oriental law, Logic, Philosophy and Medicine were taught to the highest standard”. Leitner claimed that after the events of 1857 the Punjab, by 1880, had, again a computed estimation, just 190,000 pupils. He says an entire tradition, far superior to what Europe had to offer, was destroyed.

To explain his claim, Leitner quotes from the Punjab Administration Report for 1849-51, paragraph 377: “The Musalman schools are nearly all connected with the village mosque, where the land is rent-free … the endowments are secular and religious to support temples, mosques, schools, village-inns … more of a monastic character”. An extract of report No. 335, 6th July, 1857, reaches the conclusion: “That elementary, and sometimes high, oriental classical and vernacular education was more widespread in the Punjab before annexation than it is now”. The report concludes that the events of 1857 destroyed the huge endowments that kept this `magnificent educational system intact`.

Here an amazing table brings the assertions of Dr. Leitner to the fore in his claim that the Punjab, and especially Lahore, was better off educationally in the days of Maharajah Ranjit Singh than in the British days before 1882, when his research was published. It shows that total revenue collected by Ranjit Singh in his last years, say 1838-9 as equalling 1.85 million pounds. The British managed 1.45 million pounds. Then comes the stunner. “The Sikh ruler, as a percentage, spent more on education than the Company from the revenues collected.”

In the Lahore District report of 1860, we see that it had 576 formal schools where 4,225 scholars taught. This being the case, if Lahore had so many scholars (teachers) in the year 2010, it could again become a `first world` educational city and district. Dr. Leitner provides still more statistics. He says 41.3 per cent learn the Quran, 37.0 per cent learn Persian and Urdu, 8 per cent learn Nagri, 6.7 per cent learn Gurmukhi and 7 per cent learn Hindi or debased Nagri. “The teachers are all paid in grain by the local landlords, who also send in daily rations.” Special mention has been made of the extra amounts of grain sent to teachers in Sialkot. This probably explains the qualitative edge that Sialkot education has always maintained. Its manifestations in Iqbal and Faiz can easily be seen.

It would be of interest for us today to understand the schools of Lahore of those days. Schools opened from 7am and closed at midday. In no case was a class allowed to exceed 50 pupils. If any report of this number came forward, the `Subedar` would send soldiers to arrest the teacher for trying to `destroy the future of our children`. Imagine! Can we ever imagine such care and love today.

Inside the walled city all the schools have been described in great detail. For example the Kashmiri Bazaar Mosque School had a teacher by the name of Allah Jewaya who taught the Quran and all subjects in Arabic. The Kucha Chabaksawaran School had a teacher by the name of Muhammad Abdul Aziz who taught in Persian and Arabic. In the nearby mosque of Faizullah, the teacher was Mahmood the Eunuch, who excelled in Persian and Arabic, and taught pupils how to learn the Quran by heart. In the advanced Arabic school in the Anarkali Mosque taught Maulvi Nur Ahmed, who taught grammar, logic, Muslim law and mathematics. In Suttar Mandi School taught Pandit Gauri Shankar, who taught mathematics, logic, medicine and Puran literature.

It is very clear that Lahore in the dying days of the Lahore Khalsa Darbar and the years before 1857 had a first rate educational system that was far superior to what the British had to offer. What amazes one the most is the fact that women were more educated than men, and this, Dr. Leitner observes, is what made sure that with every passing year, the literacy rate increased. Once this stopped, it progressively declined. What we are today is for all of us to think about. My way of measuring literacy, given the bias that a journalist would have, is the number of newspapers sold every day. In Pakistan the number barely crosses one million. For a population of 180 million, this means a Functional Literacy Rate of 0.55 per cent. Need one say more? The destruction continues.

A few years ago through this column we requested the Punjab government to rename Kutchery Road – from the District Court crossing to Nila Gumbad-Anarkali crossing – as Leitner Road. A `bright` bureaucrat observed on the request “no one knows of this strange man”. Shahbaz Sharif agreed and dropped the request. I am not surprised. Luckily, he is not part of the 0.55 per cent figure, though he attended the institution Leitner founded.