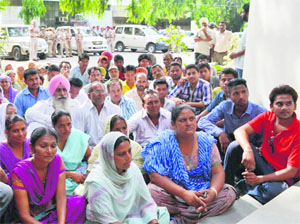 Ludhiana, Punjab: Sukhwinder Singh, aka Sukhgill of Sanghowal village here, who has been accused of hurting religious sentiments of the members of Dera Sacha Sauda, was today denied anticipatory bail by a local court.

He was booked for hurting religious sentiments by uploading derogatory photographs of Dera chief Gurmeet Ram Rahim of Sirsa on a social networking site, which had caused much resentment among the dera followers.

The arguments on the anticipatory bail application were heard by the court of Additional Sessions Judge RK Jain.

Dismissing the bail application, the court observed that it would be not appropriate to grant anticipatory bail to the accused, in view of the serious nature of the allegations levelled against him.

A large number of supporters had entered the court room when the bail application was put up for hearing. In order to avoid any untoward situation, the court asked them to wait outside. However, the complainant, Harbans Lal Singla of Dugri, was allowed to remain present during the hearing along with SHO of the Dugri police station Satvinder Singh Virk.

The Additional Public Prosecutor (APP), ML Bathla, opposed the grant of bail to the accused with the plea that it might disturb peace in society. He had alleged that the accused had done a shameful act of uploading the dera chief’s photos, showing him in a poor light. Such trend needs to be curbed and no one should be allowed to hurt the religious sentiments of any person, added the Additional Public Prosecutor.

The dera followers had blocked the traffic on the Ferozepur road yesterday from 8 am till 4.30 pm.