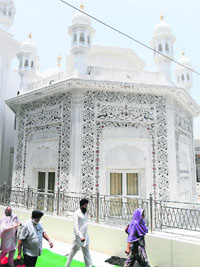 Amritsar, Punjab: Even as the stage is set for the 29th anniversary of Operation Bluestar on June 6, the memorial built in memory of those killed in the Army operation remains mired in controversy. While there is enthusiasm in the Damdami Taksal camp, the SGPC is treading with caution.

The construction work on the memorial was started on June 6 last year. The Damdami Taksal, which was entrusted with its “kar sewa”, built the memorial in less than 11 months and dedicated it to the community on April 27.

However, its opening sparked as much controversy as the start of its construction work. The reason being the Damdami Taksal’s move to inscribe the name of Jarnail Singh Bhindranwale at various points in and around the memorial. The SGPC and the Taksal are at loggerheads over the issue.

Akal Takht chief, Giani Gurbachan Singh is now brokering peace between the two sides. The SGPC took some measures to undo what the Taksal had done. It turned around the “golak” kept inside the memorial on which Bhindranwale’s name was inscribed and removed a wall clock with his photograph. However, there are five more sites where his name is engraved- two marble plaques atop the memorial entrance, two aluminum plaques on either side of the staircase and another mentioning the history of Operation Bluestar.

Damdami Taksal chief Baba Harnam Singh Khalsa said the controversy was unfortunate. He accused political parties for it. He said non-Sikh organisations should not interfere in the matter as it was purely a Sikh issue. Supporting the move to name the memorial after Bhindranwale, he said the Akal Takht had bestowed the title of “martyr” on Bhindranwale on behalf of the community.

Avtar Singh Makkar , SGPC president, refused to comment on the issue. He said the anniversary would be observed as usual.

“An akhand path is being held at Akal Takht. The bhog ceremony will take place at 8.30 am on June 6 and a message will be read out by the Akal Takht chief. The Damdami Taksal is holding a special programme at its headquarters at Chowk Mehta here where an “akhand path” will be held at Gurdwara Guru Darshan Parkash. Sources said the Taksal was putting in extra effort in holding the programme to mark the occasion as it intended to exhibit its strength and unique identity. A large number of people from the country and abroad are expected to participate in the Taksal’s programme at Chowk Mehta.

Meanwhile, the city police has been put on alert ahead of the occasion.