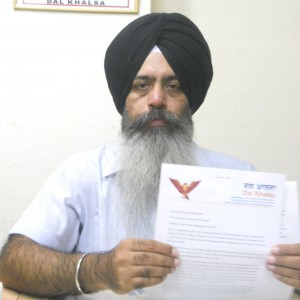 Dal Khalsa Lashes out at Amarinder on Bluestar Memorial

Amritsar, Punjab: Dal Khalsa today fired a salvo against Congress Pardesh President Captain Amrinder Singh for favouring the memorial of police cops and certain infamous Congressmen who died during the heydays of militancy in Punjab.

Party’s political secretary Kanwar Pal Singh said Amarinder Singh should now do a full U-turn and take back the honors from the government of India, which he had returned following the attack on Darbar Sahib in June 1984.

Reacting on the proposal to build a peace memorial, he said if Amarinder wants, no one was stopping him. He suggested that “Amrinder can take the support of the Congress government at Centre. Moreover, a section of police force, that has amazed immense wealth in prize money for killing Sikh youth, can also contribute something towards a memorial commemorating their anti-people, illegal and gross violations of human rights”.

He snubbed Amrinder for asking the SGPC to build peace memorial. We are clear, no Sikh institution let alone the SGPC would ever think of constructing the memorial of tyrant cops and anti-Sikh politicians, whose divisive and destructive policies plunged Punjab into turmoil.

Terming it fallacious, he slammed Amrinder Singh’s argument that the setting up a memorial about “Operation Bluestar” within the precincts of the Darbar Sahib will defile its sanctity. He said the memorial would be a step towards recognizing the martyrdom of those who fought till their last breath against the desecration of Darbar sahib and Akal Takht.

He demanded an impartial inquiry by UN agency into the killings in Punjab in 80’s and 90’s. “Let’s first ascertain ‘who killed who’ as there were hundreds of renegades operating in Punjab under the supervision of KPS Gill and his coterie at that time, who resorted to senseless and innocent killings to give bad name to the Sikh struggle”, he alleged.

The opposition of the memorial by the Congress may result in political benefits to the party but would certainly damage the polity, strained people-to-people relationship and cause unrest, he observed.

Dal Khalsa leader felt that the statements by Congress, BJP and commentator Kuldip Nayar were aimed to ridicule Sikh institutions, mock at Sikh traditions and to provoke Sikhs into violent protest.

Previous: SGPC, the biggest landlord in this part of the country
Next: Namdhari sect chief injured in attack in UK gurdwara