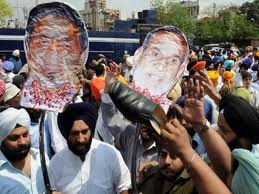 New Delhi, India: A Delhi court took strong exception to CBI’s failure to advance final arguments today in a 1984 Sikh Genocide case against Congress leader Jagdish Tytler as victims staged a protest outside against the alleged delay in handing out justice.
The genocide victims gathered outside the Karkardooma Court complex here and shouted slogans demanding justice for them and their family members who were killed in the state sponsored genocide.

They were raising slogans seeking strict punishment for Tytler and Congress leader Sajjan Kumar, who is facing trial for his alleged role in instigating the mob to kill Sikhs after the assassination of the then Prime Minister Indira Gandhi on October 31, 1984.

During the hearing, the court directed CBI prosecutor, who sought more time for advancing his arguments as he was not prepared today, to begin his arguments on the next date of hearing on March 20, failing which the judge said she would pass the order in the case on the basis of available evidence.

“If the arguments are not advanced by CBI on March 20, the next date of hearing, the order will be passed on the basis of material available on record,” Additional Sessions Judge Anuradha Shukla Bhardwaj said.

The court was hearing final arguments on the protest petition filed by riot victim Lakhwinder Kaur, whose husband Badal Singh was killed in the genocide, challenging the CBI’s closure report and clean chit to Tytler in the case.

The case was fixed for today for CBI’s arguments as on the last date of hearing the prosecutor was not available while senior advocate H S Phoolka and advocate Kamna Vohra, appearing for the victims, had concluded their arguments.

CBI prosecutor Sanjay Kumar said he has been handed over the charge of the case file recently so was not fully prepared to argue.

The judge asked the prosecutor what was the problem and why he cannot argue when the CBI officials were told earlier also that the case has been fixed for their submissions.

“Give me one final date when you can argue. If you do not argue on the next date, I will pass the order,” the judge said.

The CBI’s move of not arguing today was strongly opposed by the victims.

Earlier, the victims’ counsel had told the court that CBI should examine Bollywood star Amitabh Bachchan and a former Delhi Police officer as witnesses as they were also seen in a CD, placed on record by the agency, standing near the body of then Prime Minister Indira Gandhi at Teen Murti Bhavan where Tytler was also present.

The counsel had also sought further investigation in the matter to ascertain Tytler’s role in the killing of three persons in the massacre.

The CBI had given a clean chit to Tytler on April 2, 2009 claiming lack of evidence against him in the case pertaining to the murder of three persons on November 1, 1984, in wake of the assassination of Indira Gandhi.

Tytler’s alleged role in the case relating to killings of three persons in the riots, Badal Singh, Thakur Singh and Gurcharan Singh, near Gurudwara Pulbangash in North Delhi was re-investigated by CBI after a court had in December 2007 refused to accept its closure report.

On April 27, 2010, a magistrate had accepted CBI’s closure report in the case against Tytler, saying there was no evidence to put him on trial.

The court had allowed CBI’s arguments that Tytler was present at late Indira Gandhi’s residence at Teen Murti Bhavan and was not at the scene of crime, saying its contentions were justified by material, including some visual tapes and versions of some independent witnesses.

Witness Jasbir (now residing in California), in an affidavit, had claimed before the Nanavati Commission that he had heard Tytler on November 3, 1984, rebuking his men for the “nominal killings” carried out in the Sikh genocide.

The court rejected Jasbir’s version, saying he had deposed for something which took place on November 3 while the case related to an incident of November 1, 1984.