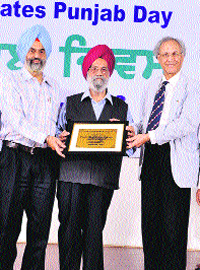 Bathinda, Punjab: The Central University of Punjab organised lectures by experts in history, economics, science and linguistics to commemorate Punjab Day on its campus here today.

Vice-Chancellor Jai Rup Singh welcomed the guests and expressed his views on geography, society, economics and cultural variation in the state. Through his lecture he depicted the passage of the state through various periods of history. He said language and culture could bridge the gap between two nations or societies. He said the state could contribute in education, agriculture, health science, industry and economic progress.

Prof Prithipal Singh Kapur, former pro-Vice Chancellor, Guru Nanak Dev University, Amritsar, was the chief guest on the occasion. He expressed his views on building of the modern Punjab. He said the function of a language was to give identity to a race or a society. “We should be aware of our wonderful history, so that we may fulfil our duty towards the state,” he added.

Guest of honour, Prof MS Kang, former Vice-Chancellor, Punjab Agricultural University (PAU), Ludhiana, said new technologies being used in agriculture in advanced countries could pave the way for future prosperity in the state. He said agriculture could be useful in enhancing the economics of a country. He elucidated the role of the PAU in improving agriculture.

Prof Ranjit Singh Ghuman from CRRID, Chandigarh, expressed his views on the economic situation of Punjab. He spoke about the contribution of agriculture in the progress of the state. The falling investment rate and lack of means were responsible for the continuing economic down trend in the state, he added.

Dr Satnam Singh Ladhar, Joint Director (Environment), Punjab State Council for Science and Technology, in his lecture said, “Only those countries are considered developed which have abundant natural resources.” He expressed concern about the air, soil and water pollution. He said the coming generations would pay the price for neglecting the environment.

Mementoes were presented to guests and speakers at the conclusion of the function.

Prof RG Saini, professor in-charge (examinations), proposed a vote of thanks. Many students, faculty, research scholars and intellectuals from the region participated in the programme.

Previous: Statement by the President Obama on the Observance of Diwali
Next: Speaker disallows resolution against Gujarat Govt