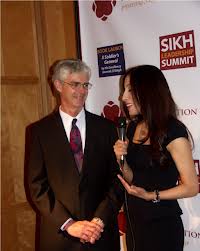 Chandigarh: Biologist-turned film maker David R Gray of Victoria (Canada) is in Punjab to trace descendants of some early Sikh settlers in his country, including those who fought in the World War I and worked in British Columbia forests to make them habitable.

Gray, who is here for four days in his first visit to India, says his interest in Sikh immigration to Canada stemmed from his chance tracking of some artifacts and leftovers of some Chinese and Indian immigrants in Victoria.

The film maker has been working in Canada for the past last 50 years, tracing some of the first Sikh settlers in British Columbia.

“Our initial attempts of tracing these Chinese were unsuccessful as the community was reluctant to cooperate. However, when we went to a Sikh temple to know about Sikh immigrants, we were able to get information on almost everything required. Some first generation immigrants and older people were able to help us with names and other details of early Sikh settlers, including those who came via Koma Gata Maru. Since then, I have been working on Sikh immigration to Canada,” says Gray, some of whose documentaries in this regard have been sponsored by Omni TV channel and the Department of Immigration and Citizenship of Canada.

“I was thinking of writing a book but then took to film production,” he says and expresses hope to find some of the descendants of eight Sikh soldiers who fought for Canada in World War I in France. Three of them came from Khraudi, Mahilpur and Paldi in Punjab. Despite many efforts, we could not trace any of their descendants in Canada. We went to France and other European countries to track their movements during the World War I. It was so difficult to track them down as they all had a common name, ‘Singh’. No one could believe till the beginning of the current millennium that Sikhs had fought for Canada in the World War I, he said.

At that time, Indians were not given voting or citizenship rights in Canada. He says Private Bukkam Singh and Private Lachman Singh, for example, had been tracked down as a researcher on Indians in the Canadian army had chanced upon one of the medals won by Private Bukkam Singh.

He says 10 years back, he could not have thought of such a venture. Canadian Consul-General in Chandigarh Scott Slessor says while browsing the web on Sikh Film Festival in New York, he came across Gray’s work and decided to invite him to India.

Gray says out of about 40 Indians (Sikhs) who are believed to have fought for Canada, only a handful could be traced.

Previous: Amritsar foundation day to be celebrated on July 6
Next: Signature of world wide Sangat