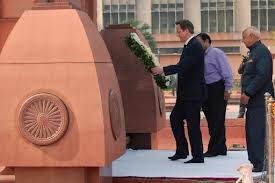 New Delhi: British Prime Minister David Cameron visited the site of a colonial-era massacre in India on Wednesday, describing the episode as “deeply shameful” while stopping short of a public apology. On the last leg of a three-day trip aimed at forging deeper economic ties, Cameron took the bold decision to visit the city of Amritsar and tackle an enduring scar of British rule over the subcontinent, which ended in 1947.

Dressed in a dark suit and bowing his head, he laid a wreath at the memorial to the victims at Jallianwala Bagh where British troops opened fire on thousands of unarmed protesters in 1919. In a message in the visitors’ book, he wrote: “This was a deeply shameful event in British history and one that Winston Churchill rightly declared at the time as ‘monstrous’.

“We must never forget what happened here. And in remembering we must ensure that the United Kingdom stands up for the right of peaceful protest around the world.”

The number of casualties at the Jallianwala Bagh garden is unclear, with colonial-era records showing about 400 deaths while Indian figures put the number killed at closer to 1,000. S.K. Mukherjee, the secretary of the Jallianwala Bagh memorial trust, spent half an hour guiding the British leader around the site, showing him a well into which 120 people jumped to their deaths as well as bullet holes in the walls.

Mukherjee said Cameron had struggled for words but had told him he was “regretful and this should not happen ever again” as he left the memorial which has 20,000 visitors a day. The incident saw soldiers under General Reginald Dyer’s command open fire on men, women and children in the enclosed area in one of the most infamous episodes of Britain’s colonial rule that helped spur the independence movement.

But the move to visit the site is seen as a gamble by Cameron, who is travelling with British-Indian parliamentarians, and could lead to calls for similar treatment from other former colonies or even other victims in India. It immediately invited a debate about why Cameron was opening up wounds from the past — and was stopping short of saying sorry — during a visit designed to stress the future of Indo-British ties.

Cameron said Monday in Mumbai that he wanted Britain to be India’s “partner of choice”, stressing their shared history, democratic values and the 1.5 million Britons of Indian origin as a foundation for a deeper alliance. “Writing a note in the visitors’ diary is a half-hearted approach. He should have met us to say sorry,” Bhusan Behl, who heads a trust for the families of Jallianwala Bagh victims, told AFP.

He has campaigned for decades on behalf of his grandfather who was killed in the shooting, which was immortalised in Richard Attenborough’s film “Gandhi” and features in Salman Rushdie’s epic book “Midnight’s Children”. Cameron is the first serving British prime minister to visit the site, diplomatic sources said, but not the first senior British public figure.

In 1997 the Queen laid a wreath at a site during a tour of India. But her gaffe-prone husband Prince Philip stole the headlines by reportedly saying that the Indian estimates for the death count were “vastly exaggerated”. Daljit Kaur, a 29-year-old British citizen of Indian origin, praised Cameron, who has visited India twice and made building an alliance with New Delhi a foreign policy priority since his election in 2010.

“I am proud that a British prime minister has admitted the blunders committed by former leaders and has invested his energy to understand Indian culture,” she said. Earlier in the day Cameron visited the Golden Temple, the most revered place for the Sikh religion, where he walked around bare foot and was photographed wearing a blue cloth covering his head.

Cameron has made several official apologies since becoming prime minister, saying sorry for the official handling of a football disaster at Hillsborough stadium in 1989 and 1972 killings in Northern Ireland known as “Bloody Sunday”.