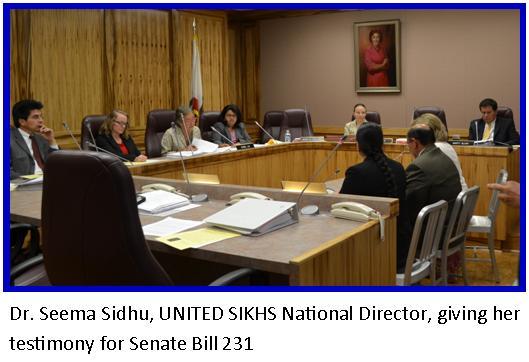 Sacramento, CA: California Senate Bill 231 passes in California Senate with unanimous support on May 29, 2013 and heads to the State Assembly. Introduced by State Senator Lou Correa (D-Santa Ana) SB 231 is a measure that will establish a California Bullying Prevention Coordinating Center, which shall address issues relating to bullying and peer abuse, with a particular focus on issues that impact pupils in kindergarten, grades 1 to 12, their families, peers, and communities.

UNITED SIKHS is a co-sponsor of the bill. We would like to thank you for your previous support of this important step against bullying and humbly requests you to continue your support as the bill advances in the process to the appropriation committee. Help us take a stand to stop bullying now. Please continue to show your support and sign the petition.

Sikhs have a distinct physical appearance as initiated by the tenth Guru of the Sikh religion. Post 9/11, Sikhs have been targets of hate crimes and increased racial discrimination at school. These problems have increased the need for spreading awareness about Sikhs and ensuring that the innocent Sikhs are not wrongly labeled or discriminated against. Studies have shown that bullying is incredibly destructive for both the bully and those being bullied; bullies often later resort to more major offenses and displays of violence, including vandalism, assault, and even murder, whereas those being bullied suffer from a lack of self-esteem and confidence for many years, sometimes to a crippling degree.

Dr. Seema Kaur, UNITED SIKHS National Director, gave her testimony in support of SB 231 at the Education Committee hearing, which took place at the State Capitol on May 1st, with specific reference to Sikh Youth Bullying and Peer Abuse. “I am very grateful for the opportunity to stand in solidarity with the BRAVE Society, legislators, and supporters of SB 231. I am here with my family, not only to show my support as a physician and a National Director of UNITED SIKHS, but as a Sikh American mother who wishes to address the issue of bullying as it affects Sikh youth and all children in every community,” said Dr. Seema Kaur.

“The choice to practice or not to practice a particular religion, is a fundamental right of every American citizen, and nothing should get in the way of this basic right. We need to take action now to put a system in place to stop harmful assumptions and judgements being made based on physical appearance, race or religion. Why should we expect our children to offer an explanation as to who they are in order to be accepted in their peer groups? The turban worn by my husband and other Sikh men covers their uncut hair, an article of Sikh faith. I want my children to be able to wear this and other articles of our faith, as they walk down the hallways of their school, with pride and not fear. I implore all of you to support this bill,” Dr. Sidhu asked the senators during her testimony.

SB 231, also known as Michael Joseph Berry Peer Abuse Prevention and Awareness Act of 2013, will establish the California Bullying Prevention Coordinating Center which will address issues relating to bullying and peer abuse and provide recommendations on future anti-bullying communication strategies, such as, bullying prevention hotline. California Bullying Prevention Coordinating Center will also establish a Coordinating Center Advisory Council, members of which would include individuals who have experience in specified areas, including, among others, hotline telephone services, social media, and behavioral health services.

More than four years after her son, Michael Joseph Berry, a victim of bullying – shot himself in a school bathroom, his mother, Lisa Ford Berry, founder of BRAVE, standing at the State Capitol next to the lawmaker who has introduced this bill said, “SB 231 creates a means for our children to say something and do something. It is solution focused prevention that creates an actionable tool thereby changing the way things are.”