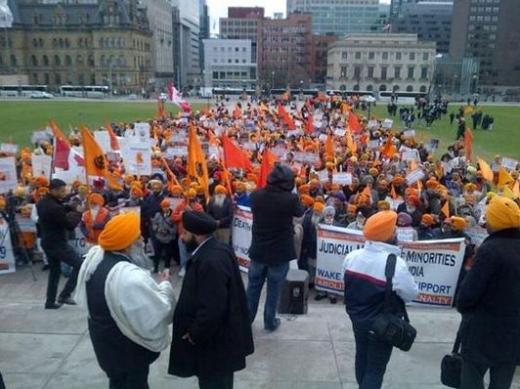 British Sikhs are the best example of cultural integration

London,UK: All parties are often guilty of focusing too heavily on the negative aspects of immigration and multiculturalism but I believe British Sikhs should be recognised for not only for their great success in fully integrating themselves into British society but also for their extraordinary contributions.

Yesterday, I hosted a Westminster Hall debate about the success story that is the British Sikh Community and of how that success has evolved. This does not just involve good community relations but also educational achievement, business acumen, military service, and a respectful attitude to their neighbours and the rule of law.

Sikhism is a 500 year old religion with over 20 million followers worldwide. It is ranked as a major world religion, with even more followers than Judaism (which has about 13 million worldwide).

In my Constituency of Dartford, Sikhs make up the largest ethnic minority. What is particularly noticeable is how well they have integrated themselves in to the local community- not just through business, but also through charity work and the hospitable nature of the local Sikh Temple.

The local Gurdwara Haragobin (their place of worship) is a lively, bustling and welcoming place. I mentioned it in my maiden speech to Parliament in 2010 because of its unique situation. Its location next door to a Baptist church, with both congregations enjoying very cordial relations, is testimony to the good race and religious relations we have locally.

On a personal note, I recently attended a Sikh wedding at Gravesend in Kent, at the invitation of a local Dartford Councillor (a Sikh himself). The ceremony was held at the Gurdwara Guru Nanak which is the largest Temple outside India. What struck me about the building was not just its beauty but also the manner in which it was built. Carpenters and bricklayers from the Sikh community all spent their spare time building this magnificent communal monument together, to have a religious home that their Sikh community could be proud of and worship in together. Anybody who is looking for an example of the Big Society in action need only go to this temple.

Sikh business is also disproportionately successful – in part because British Sikhs have a deserved reputation of having a strong work ethic. Indeed Sikhs are second only to Jews in how financially productive they are as a religious group. This belief in hard work and the importance of the family has been the reason why Sikhs have been so successful in the UK.

A cursory look at the Sunday Times rich list throws up a disproportionately high number of Sikhs. There is a clear determination amongst Sikhs to strive hard and be successful in business which is a trait that is very much to their credit.

Another claim to fame that the Sikh community can call on is the extraordinarily low crime rates associated with Sikhs. In a previous employment I was a magistrate’s legal adviser and I accompanied a group of magistrates around Feltham young offenders institution. The question of religious worship was raised and it became apparent that there were no facilities for Sikhs.

This concerned some of the magistrates who challenged this and were met with the response that we rarely get Sikhs here. I don’t know if that is still the case but certainly there has always been a culture of Sikh complicity with the law that should be celebrated and emulated in local communities.

Other examples of the contribution that Sikhs make to the UK are witnessed in the British Army where many Sikhs have served with distinction.

We have recently witnessed the sight of the first guardsman to wear a turban rather than a bearskin. This throws up a difficult debate between respect for the turban and respect for the traditions of the guards. What is clear though is the respect that the British army has shown for the turban in allowing it to be worn without a bearskin. Indeed, turbans have been allowed as an alternative to military headdress since the first world war.

Of course, we have to ensure we do not become complacent. In 2010 I raised the issue of the searching of turbans in British airports with the secretary of state in the Commons chamber.

Whilst we need to preserve security on aeroplanes we should also recognise the significance of the impact that the searching of a turban has on a Sikh. We need to ensure that security staff use all other available measures – such as scanning – before doing so. EU regulations on this issue haven’t been appropriate in the past and I praise the Department of Transport for tackling the issue with the seriousness it deserves. Fortunately on this issue, common sense was able to prevail.

Clearly, challenges remain for the British Sikh community. Prejudices based on caste are still a widespread problem. This can often go much further than classism and is a deep rooted bias of the most unpleasant kind. The sad aspect of this of course is that this is not a problem born just from outside Sikhism but often from within it too.

It is also true that ignorance of the Sikh religion is what often lies behind many prejudices. The typical response to the Kirpan (a ceremonial dagger carried by baptized Sikhs) illustrates this very well. Maybe hundreds of years of Englishmen fearing Scotsmen with their Sgian Dubhs have lead to an instinctive fear of the Kirpan. Clearly we should see the Kirpan in its correct context and be less obstructive towards it.

I don’t claim to be an expert on the Sikh religion but I have seen over the years how much of a positive impact Sikhs have had not just in my constituency but across Britain.

There are still many issues to be resolved, from citizenship and integration to understanding Sikhism and its cultures and traditions. But I also feel the time is right to pay tribute to British Sikhs in all that they have achieved. Their contribution amounts to so much more than their numbers, and I was honoured this week to have had this opportunity of hosting a debate that recognises this.