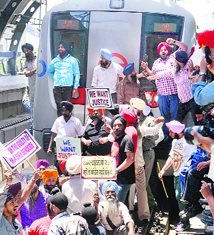 Comments Off on Big protest against Sajjan’s acquittal 394 Views

Delhi, India: A large number of Sikhs staged a massive protest in the West Delhi area of Tilak Nagar and Subhash Nagar to express their anger over the acquittal of Sajjan Kumar by a city court in one of the anti-Sikh riots cases of 1984. The protest was held under the banner of Delhi Gurdwara Management Committee (DSGMC).

The protesters forced the Delhi Metro Rail Corporation to close Tilak Vihar and Subhash Nagar metro stations for more than an hour as they entered the stations and sat on the railway tracks. They recited lines from the Guru Granth Sahib while sitting on the tracks.

Traffic jams were also witnessed on the Najafgarh road and in the Chakhandi Bazar area. The protesters, including women and children, raised slogans against Sajjan Kumar, the Delhi Police and the UPA government. They also organised a march to show their anger. Bhagi Kaur, a protester, tried to commit self-immolation near the Subhash Nagar metro station.

However, she was prevented from taking the extreme step by journalist-turned-social activist Jarnail Singh. People burnt tyres to express their anger against the court verdict.

The protesters gathered near the Tilak Vihar police station where they were addressed by their leaders. Later, they were led by DSGMC general secretary Manjinder Singh Sirsa to the Subhash Nagar metro station to disrupt rail traffic.

DSGMC president Manjit Singh (GK) said a proposal would be tabled in the next general meeting of the DSGMC to construct a memorial to victims of 1984 anti-Sikh riots in gurdwara Rakab Ganj Sahib or Bangla Sahib. Later, the police detained the protesters.

Meanwhile, Delhi Chief Minister Sheila Dikshit today said this issue should not be politicised and those disagreeing with the verdict could approach higher courts.