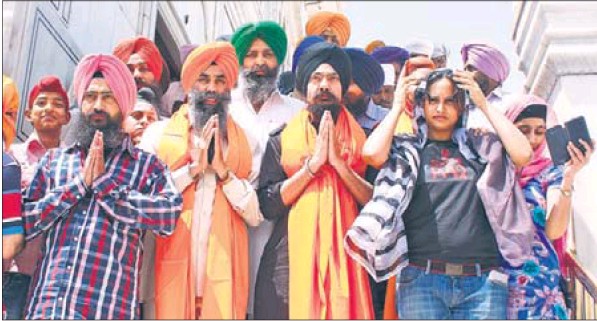 Amritsar, Punjab: In the wake of the ban imposed by various state governments on screening of ‘Sadda Haq’, the makers of the film met Akal Takht jathedar Giani Gurbachan Singh and paid obeisance at Harmandar Sahib on Sunday.

After the meeting, actor and producer of the film, Kuljinder Sidhu claimed that the purpose of the visit was to meet the Akal Takht jathedar regarding the ban on the film imposed by governments of Punjab, Haryana, Chandigarh and Delhi. The movie has not been screened in Jammu and Kashmir as well.

“We have requested the jathedar to demand clarification from the ruling Shiromani Akali Dal as well as Shiromani Gurdwara Parbandhak Committee (SGPC) as to why they decided to impose a ban on the film. A committee formed by the SGPC had reviewed our film and given its nod, but now they are not supporting us,” Sidhu said.

He claimed that the jathedar has assured him that the issue will be discussed in a meeting of the five high priests.

The star cast also performed ‘ardas’ at Akal Takht. Representatives of dozen Sikh organizations also joined them at the occasion.

Notably, Prime Minister Manmohan Singh has also expressed surprise as to how the film was released.