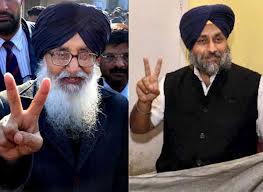 The Akali Dal routed a group led by DSGMC president Paramjit Singh Sarna, which had dominated Delhi Sikh politics and managed the Sikh shrines in the national capital for over a decade. Sarna himself was defeated from the Punjabi Bagh seat by Akali Dal candidate Manjinder Singh Sirsa.

Akali Dal candidates were declared winners in 23 out of the 46 constituencies in the DSGMC poll till afternoon. The winners included Akali Dal leader Manjit Singh GK.

Sukhbir Badal, who is Punjab deputy chief minister, said: “The Sikh community has reposed faith in us. We will deliver by fulfilling all promises made in our manifesto.”

“This election is a reminder to Sarnas that those who stabbed the Sikh community in the back by hobnobbing with the Congress, would be severely punished by the community,” he said.

He said the Akali Dal would strive further to seek conviction of Congress leaders involved in the massacre of thousands of Sikhs in the 1984 anti-Sikh riots.

Badal said the DSGMC election results were an indicator of the ensuing rout of the Congress in the Delhi assembly election and the 2014 general election.

Speaking to media in New Delhi after his group’s defeat, a defiant Sarna, who was backed by Congress leaders, including Punjab Congress president Amarinder Singh, said: “These (Akali Dal) people will ruin everything. We have no regret (about the defeat).”

2013-01-30
Guest Writer
Previous: Democracy in India is a farce’
Next: Court moved over Sikh inmate death