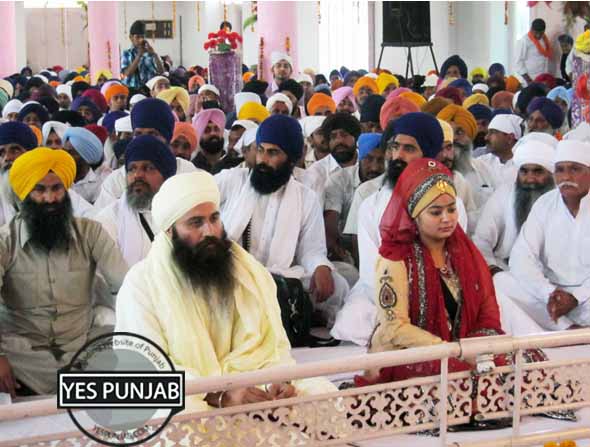 In shocking state of affairs, it has been confirmed that the head of Panthic Sewa Lehar, Baba Baljit Singh Dadu Sahib Wale got married on Wednesday 3rd April 2013 in a reported “Baje Gaje De Naal” ceremony at Gurdwara Guru Angad Dev Ji Sarainaga, in the presence of Baba Gurinder Singh Dhillon, a self-proclaimed Guru and head of the cult Dera Radha Soami Satsang Beas.

Within hours of this evidential information being released, it has caused outrage and disgust within the community, becoming headline news in Panthic circles worldwide.

Baba Baljit Singh Daduwal, 39, who tied the knot with 21-year old Bibi Sukhmit Kaur (daughter of Dr Gurmit Singh) is a well-known Sikh preacher but his personal wedding invitation to the Dera Chief has come as a surprise.

Self-styled “Jaikaareh” of “Radha Soami Ji Sahai” (contradictory to Sikh norms) were heard from the Gurdwara stage after the Anand Karaj ceremony, whilst Dera spokesperson Bhura Singh spoke on behalf of Baba Gurinder Singh Dhillon, who himself was sitting within the Sangat in Baba Daduwal’s Bharat. Sikh circles say it is shamefully regrettable and unfortunate that, if he had indeed been invited and attended with his followers, Baba Daduwal or those present were not even able to gather the courage to question and prohibit the open worshipping (“Matha Tek”) of the Radha Soami Chief whilst in the presence of Guru Granth Sahib Ji.

Also in attendance was respected Panthic leader Simranjit Singh Mann (Shiromani Akali Dal Amrisar) and although there was mumbling after the wedding of what had transpired, it is interesting to note that no one took a stand while the anti Gurmat commotion was taking place.

Baba Daduwal’s Bharat is said to have started off with approximately fifty people but gained well over one thousand upon reaching the Gurdwara. It is reported that of the rumoured 3-4 thousand attendees, the number of Radha Soami Satsang Beas followers in attendance exceeded by far of those in attendance that were Sikh followers, hence the emerging news reporting’s, “Vyah Babeh Daduwal Da, Mehl Radha Soamia Da”.

Often seen to be a political and religious leader opposing any such Dera’s, in light of recent events Baba Baljit Singh Daduwal has sadly been characterised as a hypocrite for on one side speaking against the likes of Dera Sacha Sauda, but on the other side making a personal alliance with the Radha Soami Dera, an organisation responsible for the large scale conversion of thousands of Sikhs into followers of human Gurudom during the mass construction of hundreds of red Radha Soami “places of worship” in almost every village, town and city of Punjab.

– It is worthy of note that the Radha Soami Dera Chief, who has a Z-Plus security protection level from the Government, is rarely seen in public outside of his own mass following and only attends high level functions or those that are of paramount importance to him personally.

– The hypocrisy that has come to light now is not the first as Baba Daduwal is a well-known confident of Delhi’s Paramjit Sarna, but at the same time is allegedly supposed to be opposing the Congress.

– Whether no stand was taken against Baba Daduwal and the Radha Soami Chief by those in attendance was to avoid upsetting the marriage ceremony is unknown, but the Sikh nation will certainly require explanations in the coming time if such leaders are to be given the respect to use Gurdwara stages for preaching.

It should be noted that all Sant preachers should not naively be categorised within the same class. There have been, still are and always will be great preachers, katha vachak’s, kirtani’s, kavishar’s and dhadhi’s who shine with sincerity and continue to spread the message of Sikhi without any hidden or political agenda.

Speaking against the anti-Panthic organisations on stage, then staging arrests to be later released using political contacts is not a lasting sacrifice. True colours will show when actions do not speak louder than words. It is disheartening for thousands of Sikhs around the world to have to question why such a big mistake has been made and what goes on behind the closed door meetings of Sikh leaders with Dera heads. Why Baba Daduwal, who in the past spoke against Dera’s such as Radha Soami Satsang Beas, has now suddenly taken a u-turn is indeed a mystery.

Baba Baljit Singh is currently rumoured to be making post wedding vacation in the Shimla region of India.