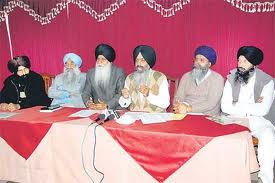 Amnesty to Kashmiris, why none for Sikhs: DSGMC

Comments Off on Amnesty to Kashmiris, why none for Sikhs: DSGMC 315 Views

London, Birmingham, UK: When Kashmiris who had strayed could be given amnesty, why exclude the Sikhs who had sought foreign asylum after escaping the riots of 1984, the Delhi Sikh Gurudwara Management Committee (DSGMC) has asked the Indian government.

The DSGMC is on a mission to the United Kingdom (UK), to first address the problems of the Sikh community abroad and then bring the hardliners back into the national mainstream. Its president, Manjit Singh GK (54), who will lead a 10-member delegation to destinations including London, Birmingham, Manchester and Scotland in a week, has said that “if the hardliners have remained aloof and isolated for many years, the Indian government is responsible largely”.

“It continues to paint the Sikhs who had taken asylum in various European and North American countries after the riots in Delhi in 1984 as terrorists, so they have no option but to support the separatist agenda,” said GK, who with his delegation arrived in Britain on September 17 and ever since is visiting gurdwaras and Sikh organisations such as Sri Guru Singh Sabha Gurudwara in Southall and Gravesend to convey that Sikhs have been the biggest nationalists and their contribution to India’s struggle to freedom has been immense.

“When the people of Jammu and Kashmir who had strayed could be given amnesty, why the Indian government is not applying the same yardstick to Sikhs,” said GK. Now the Shiromani Akali Dal (SAD), Punjab’s ruling party led by Sukhbir Singh Badal, has dethroned the Paramjit Singh Sarna as DSGMC president after almost 12 years (Sarna has since moved on to a top post with the Congress support) but all these years, its leaders could never engage in a dialogoue with the Sikhs living abroad, especially the hardliners in the UK. Still, the SAD wants to send a message to the Indian Sikh diaspora that it is sympathetic to their cause of returning to India.

During live interaction with the audience on The Sikh Channel in Birmingham, GK and his team faced a volley questions on why the Badals or anyone from their family had stayed away from reaching the Indian Diaspora here. Gurnam Singh, professor in a local university, asked GK if he was a Khalistani or an Indian, to which the latter replied that he was very much an Indian and there was no support for the Khalistan movement in India at all.

The programme, scheduled for an hour originally, went on for two hours and 10 minutes. GK even went on say that he wouldn’t mind shedding his blood to ensure that Sikhs were dubbed terrorists no longer, in India or abroad.

The delegation also met Wolverhampton MP Paul Uppal to seek his help in securing the UK government’s support to the cause. “The issue is being taken up with the UK government but it has to be addressed by the Indian government as well,” said Uppal.