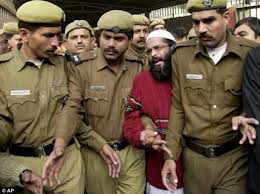 London, UK: The Amnesty International today condemned the hanging of Afzal Guru. The Supreme Court while upholding the death sentence of Guru had said, “The incident, which resulted in heavy casualties, had shaken the entire nation and the collective conscience of the society will only be satisfied if the capital punishment is awarded to the offender.”

The judgment delivered by Justice P Venkatarama Reddy and Justice PP Naolekar had also said that Guru’s case “has no parallel in the history of Indian Republic,” and that it “presents us in crystal clear terms, a spectacle of rarest of rare cases”.

The attack had taken place when on December 13,2001, the Indian Parliament was in its winter session. At 11.30 in the morning, five armed men in a white Ambassador car fitted out with an Improvised Explosive Device had driven through the gates of Parliament House. In the gun battle that followed, all the attackers were killed. Eight security personnel and a gardener were killed too.

“Execution of Mohammad Afzal Guru indicates a disturbing and regressive trend towards executions shrouded in secrecy and the resumption of death penalty use in India,” said a statement issued by Amnesty International India.
“We condemn the execution in the strongest possible terms. This very regrettably puts India in opposition to the global trends towards moving away from the death penalty,” said Shashikumar Velath, Programmes Director at Amnesty International India.

Afzal Guru’s death sentence was confirmed by the Supreme Court in August 2005, and his mercy petition was reportedly rejected by the President on 3 February 2013.

“Serious questions have been raised about the fairness of Afzal Guru’s trial. He did not receive legal representation of his choice or a lawyer with adequate experience at the trial stage. These concerns were not addressed,” said Velath of the Amnesty International.

On the other hand peoples democratic party said the execution of Parliament attack convict Afzal Guru was disappointing. PDP president Mehbooba Mufti demanded handing over his body to the family for last rites.

“While the hanging should not have been carried out, the return of Afzal’s body was the least the government could do to show its concern for humanitarian values,” the PDP president said in a statement here.

Mehbooba said the PDP believed that whatever the requirements of legal process, there was a need for the government to take into consideration the overall political impact of this execution, which is the reason why the option of mercy has been provided under the constitution.