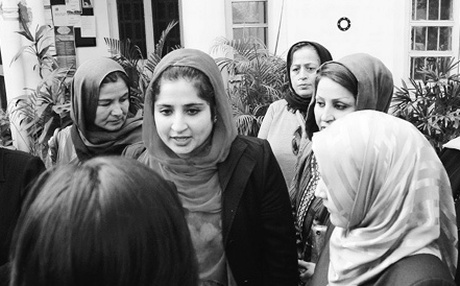 Delhi, India: About a decade ago, Anarkali Kaur Honaryar was forced to leave her government job due to her religion. Now, she is a member of Afghan Parliament’s upper house, involved in nation-building for the war-ravaged nation.

Having worked for women’s rights all her life, Honaryar,37, the first women MP from Afghanistan’s miniscule Hindu and Sikh communities, has been closely monitoring the developments in India for the last few months after the Delhi gangrape.

“I saw how civil society raised its voice. I was very happy with the changes brought in the law by the President (of India),” said Honaryar, a trained dentist, who is currently in Delhi for a training programme for Afghan senators at Parliament.

She believes that rather than a stringent law, a change in mindset is required to stop the maltreatment of women. “To change mindset, you need time,” she noted, pointing out that education often makes no difference when it comes to crimes against women. “Many highly educated men have the mindset that women should be always at their beck and call… So, it will take a long time to change. But, we will have to keep on striving,” she said.

In 2011, she was awarded the Unesco-Madanjeet Singh Prize for the Promotion of Tolerance and Non-Violence for her work in the field of women’s rights.

Brought up in Baghlan in northern Afghanistan, she had to give up her government job. “I was working as a vaccinator at that time… There was a letter from the Taliban that Hindus and Sikhs cannot do government jobs, so I had to give it up,” she said. Similarly, her father, an engineer and a sister, were also forced to stay at home.

After getting an international award for her women’s right work in 2009, President Hamid Karzai asked her to contest the 2010 elections to the lower house, Wolesi Jirga. She lost, but was nominated by Karzai to the Meshrano Jirga as a representative of the Hindu and Sikh communities.

“Our main difficulty had been the problem of a cremation ground in Kabul. The government has helped a lot in these. Now we are planning to build a separate area in Kabul for the 142 families, where they will get housing and have their own cremation ground. As soon as the weather changes, we will start construction,” she said.