Milwaukee,Wisconsin: According to a  news Bhai Punjab Singh, a learned Sikh preacher who was critically wounded during the shootings at Wisconsin’s Oak Creek Gurdwara Sahib in August has been discharged from the Froedtert Hospital. The attack had claimed lives of seven people and left four in critical condition.

Punjab Singh, a student of Damdami Taksal was on a tour of United States when he met the tragic incident. His condition remained critical for weeks post the shooting incident.

The following statement was issued by Bhai Punjab Singh’s family on the Froedtert Hospital’s website:

“Our dear father and husband,  Punjab Singh, was critically injured during the August 5th attack on the Sikh Temple in Oak Creek, Wisconsin.  After more than two months of care at Froedtert Hospital, he has recovered enough to be released from the hospital.  He still requires around-the-clock care and our family made arrangements to transfer him to a health facility where he will continue receiving this care.

We are grateful to the doctors and nurses at Froedtert Hospital for their compassionate care,  and to the people around the world who have kept him in their thoughts and prayers.” 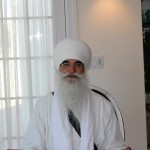