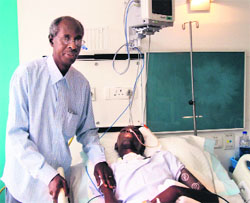 Patiala, Punjab: Sixty-year-old Burundi national Nestor Ntibateganya says he will consider the Punjab Government’s offer to bear the expenses of airlifting his son Yannick Nihangaza to Burundi under the supervision of medical experts. The offer was made by the Punjab Principal Secretary (Home), DS Bains, on Friday.

Yannick was critically injured in an attack by nine persons on April 21. He is being treated at a local hospital. Nestor said he would think about the offer, but his main demand was that the accused be brought to justice. “If we are to shift, we will do so at a later stage. I will wait for justice to be delivered,” he said.

“If I shift my son to Barundi now, my only regret will be that the guilty are still roaming free,” he said. Nestor, who works for an NGO back home, has been on leave for over seven months now. He says the medical facilties in India are much better than those in his country.

Despite requests, the hospital management refused to entertain any query. Yannick’s father claimed that his son was improving and was “off the ventilator”.