US Sikhs to lobby Sikh Genocide petition before the United Nations

San Francisco,California: Decrying denial of justice, Hundreds of Sikhs attended the “Sikh Genocide and Sovereignty” Conference held in San Francisco on October 21, 2012 and voiced concern for the continuous impunity to political activists and police officers involved in genocidal attacks on Sikhs during November 1984. SFJ announced to file a “Genocide Petition” before U.N. Human Rights Commission (UNHRC) in November 2013.

Sikhs for Justice (SFJ), a human rights group organized the Conference with the help of Gurudwara Management Committees across California. SFJ will approach Israel, Armenia, Bosnia and Rwanda who have been victims of genocide for the endorsement and support of Sikh “Genocide Petition” before UN, stated attorney Gurpatwant Singh Pannun, legal advisor to SFJ. Through this Petition, SFJ will provide UN with documents; witnesses and evidence related to November 1984 Sikh Genocide, added attorney Pannun.

According to Jatinder Singh Grewal, Director, International Policy SFJ , “1984 – Yes It’s Genocide” a site has been launched to collect “Million Signatures” in support of the Sikh “Genocide Petition”. The SFJ team will visit Australia, UK and European Union to collect signatures in support of the petition, added Grewal.

Ms. Indira Prahst, Chair, Department of Sociology and Anthropology, Langara College and Race and Ethnic Relations instructor who specializes in Sikh human rights issues, while addressing the conference stated that “Part of this quest for freedom for some Sikhs is the freedom to oppose a state which suppresses their Sikh identity and to contest state violence inflicted on Sikh bodies with impunity.

Without such freedom, real or perceived, some Sikhs have raised the question of sovereignty which is not baseless in the context of human rights violations including genocidal violence in November 1984.”

Amandeep Singh representing “Sikh Students Federation” (SSF) stated “It is absolutely clear that Sikhs’ search for justice has to be sought at international forums such as the UN, and not the Indian judiciary. The search for justice is inseparable from and constitutive of the struggle for sovereignty and decolonization.”

“Under international law, India is bound to give the Sikhs a right to self determination because the UN Covenants guaranteeing this right were ratified by India in 1979”. “It’s fundamental right of every religious, racial, ethnic and linguistic community to demand “self determination” added attorney Pannun. The right to sovereignty and self-determination for all religious, racial, ethnic and linguistic minorities is guaranteed in the UN Charter and under “International Covenant on Civil and Political Rights”. 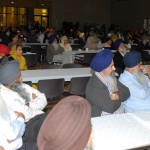