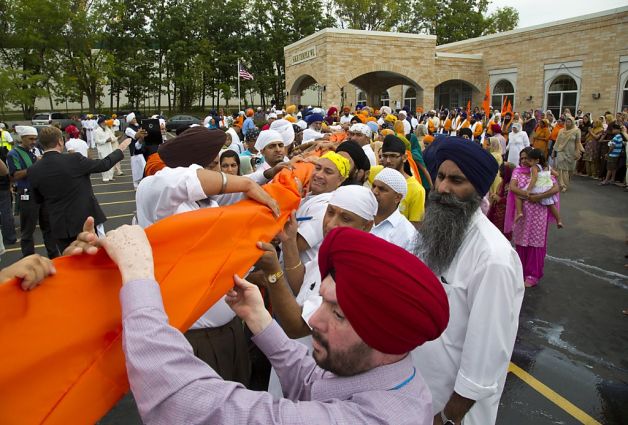 San francisco,California: A flag ceremony is held in August outside the Wisconsin temple where six Sikhs were slain. Out of the tragedy, some Sikhs found an opportunity to increase awareness, including in California universities

Santa Cruz —
The first slide that Professor Nirvikar Singh flashed on his PowerPoint showed the faces of six Sikh worshipers gunned down the previous month in Oak Creek, Wis., by a man with white supremacist ties.

As after other attacks since 9/11, the UC Santa Cruz professor explained to students in this fall introductory course, the Wisconsin shooting revealed an abiding ignorance over who Sikhs are – and aren’t.

“Despite being in this country for more than 100 years, I think Sikhs are not well understood,” said Singh, a 58-year-old economist, dressed in jeans and a midnight blue turban.

Singh holds the university’s nascent chair in Sikh and Punjabi studies – the fourth of its kind in California and part of a broader movement to spread the word about the world’s fifth-largest religion while promoting scholarship.

For students like David Villalobos, the course offered a chance “to get to know a culture I know nothing about.” Guneet Kaur, who along with about a third of Singh’s three dozen students is of Sikh heritage, craved the perspective of non-Sikhs and a “sounding board” on the Oak Creek temple massacre.

Like those at UC Santa Barbara, UC Riverside and Cal State East Bay, the program was initiated with an endowment from a Sikh family honoring a relative. It comes at a time of promising developments in the community’s struggle for exposure.

Attempts to include basics on Sikh history, religion and political struggle in California’s kindergarten-through-12th-grade curriculum are moving forward after years of delay. Embracing a legislative declaration of November as “California Sikh Awareness and Appreciation Month,” Superintendent of Public Instruction Tom Torlakson has recommended instructional materials and attended outreach events.

Meanwhile, California is enacting the nation’s strongest workplace religious freedom law, barring employers from rejecting religious accommodation unless they can prove doing so would impose “significant difficulty or expense.” Sponsored by the nonprofit Sikh Coalition, it is expected to loosen prohibitions on such Sikh articles of faith as unshorn hair and carrying a kirpan – a small sword that represents self-reliance and readiness to defend the oppressed.
The changes come as Stockton’s gurdwara – the oldest and for decades only Sikh temple in the United States – celebrates its centennial and as statewide conferences on Sikh history, religion, art and music proliferate.

“The tide is turning,” said Bruce La Brack, a professor emeritus in cultural anthropology at Stockton’s University of the Pacific, who began studying California Sikhs in Yuba City nearly 40 years ago.

Rooted in the Punjab region of the Indian subcontinent, Sikhism was founded by the 15th-century Guru Nanak on tenets of monotheism, egalitarianism and community service.
The tenth and final guru, Gobind Singh, deemed the Sikh sacred scripture to be his eternal successor, and the voluminous text known as the Guru Granth Sahib became the focus of religious life.

In the late 19th century, Sikhs first migrated to British Columbia and then California, where the men worked the railroads before turning to peach and almond farming. Discrimination and misconception were ever present.

Today there are an estimated 600,000 Sikhs in the United States, about 250,000 in California, said La Brack. The largest community is in the Bay Area, where Sikhs have thrived in Silicon Valley and built six gurdwaras – among them a $20 million facility in San Jose that accommodates 10,000 worshipers.

Although most Sikhs focused on faith and family, an entrepreneur known as the father of fiber optics launched the philanthropic Sikh Foundation in Palo Alto in 1967 to broadly promote Sikh culture. By 1999, Narinder Singh Kapany had dedicated a gallery of Sikh works at the Asian Art Museum of San Francisco and endowed the first university chair, at UC Santa Barbara.

I felt that the Sikh culture needed to be understood in the U.S., and also by the Sikh youth,” he said in a recent interview.

Kapany, 85, matched donors with three more California universities. The endowment for the Santa Cruz chair, begun last year, came from a San Antonio family in honor of their son, Sarabjit Singh Aurora, an engineer who had died of cancer.

“He was always very keen to educate kids in the schools about Sikhism,” said his sister, Arvinder Kaur Aurora, 42.

The need for mainstream education, she and others note, became more pronounced after 9/11. Mistaken for Muslims because of their turbans, Sikhs were targeted. Among them was an Arizona gas station attendant killed by a self-proclaimed “patriot” who had vowed to shoot some “towel heads.”

Incidents tracked
The Sikh Coalition has since tracked about 700 attacks or bias-related incidents, including the slaying last year of two elderly Elk Grove (Sacramento County) men who were out for a walk. Then came the Oak Creek shootings in August. But this time, the community was prepared.

Sikhs throughout the United States invited neighbors, lawmakers and educators to langar, the temple kitchens that feed all comers to show acceptance and equality. The Sikh Coalition was so inundated with requests for help, it created an online resource for temples.

“This is a pivotal moment for us,” the website reads. “We’ve never before been in a position where people are primed and ready to listen, understand, and appreciate Sikhs in their community.”

As Kapany made inroads in higher education, a retired entomologist took on California’s K-12 social studies curriculum, securing references to Sikh religious and civil rights leaders in the proposals now moving forward. He also won a bittersweet concession: In reviewing a current seventh-grade textbook, Onkar S. Bindra, 81, of Sacramento had found “four or five lines” of text about Sikhism, accompanying an image of Guru Nanak – wearing a crown and close-cropped beard. Both amount to sacrilege.

The publisher later agreed to remove the image – without replacing it.

“There is a lot of misinformation and ignorance,” said Bindra, who gamely asks strangers on the train to guess his origins – they almost never can.

For Nirvikar Singh, leading Santa Cruz’s program has been an act of seva, or selfless service expected by the Sikh faith.

Creating a curriculum
“I felt I really could not pass this up,” said Singh, a professor of economics at the university since 1982. With an expertise in Punjab’s political economy, Singh has also researched and lectured on Sikh art and literature and is crafting a program that is “not boxed in by any one discipline.”

Earlier this year, the university secured another gift to teach Punjabi and held its first class this summer at the San Jose gurdwara for university students and community members.

Singh’s program has fit well with the university’s “comparative and transnational approach,” collaborating with programs in Jewish and feminist studies, said humanities Dean William Ladusaw, a linguist who says he has “treasured” his own educational journey.

“I knew Sikhs were Sikhs, but I didn’t really know what that meant,” he said.

On a recent Sunday, a chartered bus wound its way up a hill to the San Jose gurdwara, the nation’s largest, where Singh’s students toured a small museum, dined with worshipers and listened as text from the Guru Granth Sahib was read in the carpeted hall of worship.

“It’s so accepting,” said Virginia Perez, 22. “I felt a little teary-eyed that I could be part of it.”

Navdeep Kaur of the Sikh Students Association said UC Santa Cruz is gaining much from the program. Ironically, she noted, the recent tragedy raised awareness.

“As sad as it was that Oak Creek had to happen, something good came out of it,” said Kaur, 21, an education and history major from Fresno. “It ends in opportunity – not just for Sikhs but for everybody.”