Stockton,California: The Sikh community came from near and far this weekend to celebrate the 100th anniversary of the Stockton Gurdwara – a temple on South Grant Street that holds special meaning, because it represents the first permanent Sikh settlement in the United States.

A weekend of events, including the reading of a state resolution honoring the centennial, culminated Sunday with a colorful parade through downtown Stockton.

Attended by a throng of thousands, the stop-and-go parade was punctuated by martial arts demonstrations, live music and a veritable rolling potluck of sorts.

“We were just standing here watching the parade, and a guy walked up with a crate and handed us this,” Brian Debem of Stockton said as he dug a plastic fork into a plate of fruit. “It’s kind of like a fruit cocktail, but its not sweet, it’s spicy.”

And there were plenty more opportunities to sample all kinds of dishes and beverages along the parade route. Not surprising, because the temple was specifically built to offer food and drink to those in need.

There were offerings of stew, baked goods, candy, tea, and from the back of pickups, young men handed out cans of soda, bottled water and other drinks.

Periodically, the parade stopped and participants gathered in a circle to watch performers engage in martial arts demonstrations.

Taranpreet Singh, 13, said the weekend was an important religious event in the Sikh community in which he was proud to participate with so many others.

“We used to fight like this to protect our people,” he explained. “But now, our martial arts is considered an art form.”

He and his friends wore white tunics with bright orange sashes tied around their waists and wielded long batons as they performed.

The parade was something of a reunion for Sikhs of all ages and walks of life.

Kulbir Bainiwal, 21, of Stockton was hanging out with members of the California Gatka Dal, a Sikh martial arts group. They practice Gatka, a weapon-based martial art associated with the Punjab region of India. Gatka refers to the batons they use to spar.

“I’ve been doing it my whole life,” said Bainiwal, who is a student at San Joaquin Delta College. “Our group has a lot of trophies from all the competitions we have been to.”

As she spoke, the parade came to a stop under the Crosstown Freeway and a circle formed for another spirited martial arts display.

Several hours later, the parade ended back at the temple for more food, music and reflection on the Sikh pioneers of the past who made the weekend’s festivities possible. 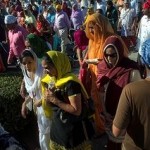