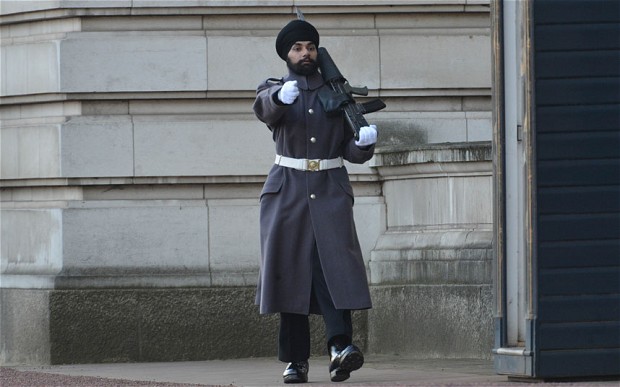 London,UK: Jatenderpal Singh Bhullar, 25, is the first guardsman in 180 years of tradition to choose to wear his turban on the famous forecourt.

The Scots Guardsman previously said being the first Sikh to mount guard in a turban would be the “best thing in his life”. The 25-year-old said: “Conducting public duties while being a practising Sikh and wearing my turban is a great honour for me.

“I am very proud to be a member of the Household Division and to be the first Sikh Guardsman to mount guard in a turban will be the best thing in my life, especially as a member of the Scots Guards.

“The regiment is full of history, as is my religion.”

Guardsman Bhullar, from West Bromwich in the West Midlands, has just joined F Company Scots Guards – what is known as an “incremental company” of soldiers responsible for delivering ceremonial duties in London.

As a 5 K Sikh – someone who adheres to all five symbols that mark Sikh identify – he will also be distinguishable from his fellow soldiers on parade by his beard.

Sikhs in the Household Division have guarded the Queen many times before, but have always worn the bearskin.

“Sikhs have served Britain in World War One and Two with their turbans intact, confirming their commitment towards righteousness and serving others and living their identity till their last breath.

“I applaud the British Army for being appreciative and respectful towards diversity.

“I salute the Scots Guards who have shown a great courage by adding more to their rich traditions.

“Guardsman Bhullar is the first Sikh guardsman to do ceremonial duties with the Turban and I, along with the Sikh community, are very proud of him and send our blessings that he makes his regiment proud of him as he serves his nation.”